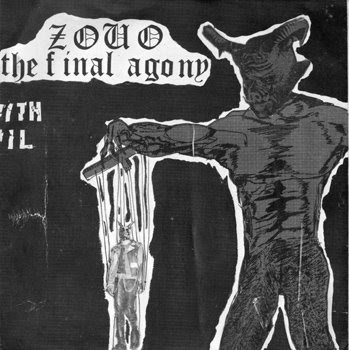 When it comes to Japanese Hardcore, Zouo was second only to the mighty G.I.S.M. In fact, Zouo sound quite a bit like G.I.S.M., with their fuzzy muted guitar sounds, crazy solos, and gruff vocals. I imagine, had Zouo been around as long as G.I.S.M., they'd be revered in much the same way. Sadly, Zouo's only official release was this brilliant EP, The Final Agony. Posthumously, some unreleased tracks were featured on the Gai/Zouo split bootleg LP. After their break-up, their vocalist moved to the USA and did a brief stint as the frontman for Pittsburgh HC band, Half Life. The remaining members went on to form Danse Macabre, an even more metallic concern, but nothing can top The Final Agony, not even a blowjob made of money
Here
Posted by Aesop at 12:42 AM

Syphilitic Vaginas does to Zouo what Disclose does to Discharge. Make love with devil is even covered...

Yes, I am familiar with them. Great band.

Domo arigato gozaimashita aesopsan! I too have been enjoying Syphilitic Vaginas as of late...

Anna, I too enjoy vaginas.

well, I hope the vaginas you are enjoying are not syphilitic!

While I have about as much knowledge on Japanese hardcore as a Victorian-era Englishman would have on the nuances of string theory I'll still say this is some pretty damn good stuff.

Uh, I like it too. thanks for sharing this one!

Half Life is from Pittsburgh.

We are not Philadelphia.

Ouch, duly noted and quite fixed. If I remember correctly, Pittsburgh had soul, while Philly was NY lite.

did a load of research on Zouo. this is both for the Final Agony 7" and the Gai/Zouo split LP(hence comments on Gai)

The Name means "Hatred" in Japanese, and they are from Osaka.

And have a reputation in japan not unlike GISM, as in nasty fuckers.

The orig 45 is AA records 002, AA being run by Charmy of Laughin' Nose.
The original 7" is one of the big Japcore rarites, maybe 1000 pressed.
I have a mate who DJ'ed in Japan several times and said he saw all the Jap rarites for sale EXCEPT Zouo and the Typhus flexi, and Stalin Trash LP (which he saw but was then not for sale)
He paid a load of cash for it on ebay in the end. (180 GBP in fact......)

You say the Gai Zouo split has unrelased Zouo, actually it's the Zouo 7" plus the two tracks of the Hardcore Unlawful Assembly LP (AA 04, also with Gism, Cobra, Lipcream, Baws, Mobs, Outo, Laughin' Nose)
So the tracks are not unreleased.
HCUA come in a poster sleeve, and was booted in Europe a few years back but in normal sleeve, missing out the neat artwork, a lot by sakevi i think.
Also has the lyrics to these two songs.

the Gai stuff is the flexi plus the 3 tracks off V/A - Pinch and Ouch LP, all Kyshu bands.

While the this LP is a good idea, it sounds like crap.
Note that the Zouo EP is taken off the mid 90's bootleg 7", which is one of the crappiest boot re issues i know of, has all the dynamic range of a cheap cassette and an amazingly shit sleeve as well!!!!!!

This is the sleeve shown on the really informative LP insert. (i'm being sarcastic here...the inert is one sided with crappy pixelated pics of sleeves and very little info, not even where the Gai tracks are from.)


As for unreleased....
many years of enquiries later, there are a couple of Zouo tapes out there.
One is live at Candy Hall, Osaka 1984. Reasonable live tape.
The other is a "Live demo", sound like a rehearsal room tape, good clean recording to I think a stereo mike.
10 tracks total, the 7", the two off HCUA, a Defects cover, "survival" and 3 unreleased. One is work in progrees, one is called "I Believe in Violence" and one more.

The Candy hall tape has Survival and I Believe in Violence as well. maybe the other two as well.

There are pics of Cherry (singer) playing with Half Life in old MRRs.

Pics and interviews of the band are rare, apparently "the band hated to be in the zines even just the artworks
or being photos taken and there's only one zine exists that has an interview of Cherry. It's an unknown '80s
zine done by the people from Eggplant in Osaka."

Wow, thanks, Mr. 82. Yes, I have some live Zouo stuff where the vocals are way loud in the mix, I plan on posting it eventually. I never knew the stuff from the slit to be released, but I have been known to be wrong. They also contributed to a comp called "Keep This Bag Away From Children" but whether or not this is an "official" release is still unknown to me.

Actually, I own the split, you are absolutely right about the tracks being on the HLA comp. I have a friend who owns the Final Agony ep and was kind enough to make a huge xerox of the cover. The live stuff I have is from Yaneura in '84.

Really dig these guys. Something so raw and desperate about this album. Bleak and nasty. Thanks for also sharing the bootleg split with GAI.

a little info that UK82 forgot to mention, cherry's real name is katsunori nishida. after zouo ceased in '84 sometime later nishida went to new york for a while where
he stayed with friends and jammed with half life for fun(no recordings were made). when nishida returned from NY
he formed danse macabre. they recorded a self-titled ep ('87) and two albums (total macabre '90 & ladder out of hell '94).
they also contributed some tracks to compilations albums like taste of wild west and fear.
only one zouo show i know of exists on tape and thats on youtube. as for DM, they have 2 or 3 sets on compilation tapes.
i cant recall the names of the videos but on one of them sqwad(!) is on it as well. sometime after their last album they broke up and went seperate ways
i dont have a fucking clue what the zouo boys are up to these days but they sure left a sick legacy behind. being the first black metal/death punk to combine politics and satanism in one and pull it off to a punk audience is no easy task.
RxIxPx ZOUO

cherry didn't "front" half life but he did stay with them for awhile and i remember him singing one or two songs with them around 85 or so in pittsburgh. half life's singer was jeff lamm. i'm still not sure why cherry was in pittsburgh at the time but i remember he had spiked hair and a lot o studs on his leather.

My pal Jim Hayes is correct. Cherry sang a few tunes with Half Life while he stayed with us (In Pittsburgh) via our guitarists' girlfriend, who was an exchange student that lived in Osaka. The highlight for Cherry was singing "Where eagles dare" to Glenn Danzig at a Samhain gig! We took Cherry to DC to see No Trend and Nuclear Crayons...some people tried to fight us but Cherry scared them away. He spoke little english and shared his food with us! he brought a Japanese Ultraman toy to me as a gift, which started a lifelong love of collecting Japanese toys.

I'm not positive but there may be a live tape of the Samhain gig out there.

Would love a proper re-release of this record.

i did a search for cherry to release ZOUO LP with unreleased live tracks with lyrics, pics and as much stuff as possible, but it seems that it's a dead end. i've tryed to contact butcher from OUTO first (some say he is cherrys brother) through blood sucker records, but didn't get any reply after i've revealed the reason. also found katsunori nishida (cherrys real name) on facebook, but it seems that he is not cherry (or so he said), although his hometown was osaka (like cherrys). also tryed to contact alchemy records, where cherry released his danse macabre albums, but didn't get any reply... that's really sad. ZOUO was awesome band and that live video (probably the only one that exist) is so great! there are 9 live recordings of ZOUO that exist and the unreleased track are awesome like the whole ZOUOs stuff

i really hope, that one day someone will post some of ZOUO bootlegs.

i'm afraid, that this whole stuff can dissapear one day... you know, shit happens!