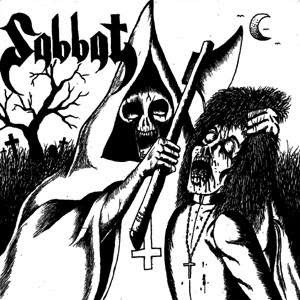 Sabbat's rich history of Far East cult metal dates back to 1983. Since their inception, Sabbat has released a staggering 37 EPs, 10 LPs, 41 Live albums, and 14 splits. It would seem that the Japanese stereotype of overachieving applies to their metal bands as well. Here I present Sabbat's debut single from 1985. This is a record that has more merit as historical artifact than for actually being a great release. Gezol hadn't developed his vocals yet, and the band seems to suffer from the usual identity crisis that comes from being young and excitable, but the track Mion's Hill is a total keeper. It sounds like a juvenile, unpolished Mercyful Fate. Naturally, Sabbat has improved leaps and bounds since 1985 but this little pearl was first. Enjoy.
これで
Posted by Aesop at 12:00 AM

I gotta say i prefer Metalucifer to Sabbat. Just gone through and read all your post and downloaded some amazing stuff, right now im listening to Supernaut's nice keyboard-work. Thanks!

i've probably only heard about 60% of this band's discography, still quite a hefty amount of material, and I've yet to hear single thing from them I did not enjoy. Their most recent studio album Karmagmassacre from '03 is absolutely fucking brilliant.

Wow, thanks for this.
You know I loves me some Sabbat!

I remember waking up vomiting one morning a ways back and this was on the floor to catch it which bamboozled me as I didn't remember buying any Sabbat previously. It's been with me ever since.