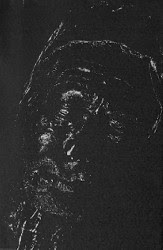 Bone Awl's third release, the cassette titled Bog Bodies, is inspired by the well preserved mummies of Iron Age men and women found in the wetlands of Europe. The remarkable preservation of the bog bodies is attributed to the peat in the bogs, the cold climate, and lack of oxygen. Many of the bog bodies were found to have been stabbed and bludgeoned. It would seem from the lyrics of the song "Lindow Man" that Bone Awl did their research: slumped into shoulders/a dark leather face /from the long slumber/in a grave of peat/beard stained red/sinews around neck/of ritual killing/ iron age execution. Seemingly appropriate subject matter to compliment Bone Awl's stark, primitive approach but also shows that Bone Awl are a bit more erudite than most black metal bands. This is the duality of Bone Awl and what makes them a most fascinating entity.
Here
Posted by Aesop at 12:00 AM

I have another Bone Awl record buried on my external hard drive, Not On Our Feet, which I thought was quite good. I've not listened to it for a while (no room on my mp3 player!), so this one has whetted my appetite again. Thanks very much!

yup, Bone Awl Rules, that is for sure.

Thanks, Aesop. I don't know much about Bone Awl, but what I've heard, I like. I'm told that the new 7" on Nuclear War Now! is pretty damned good, too.

I have the cassette, but just wanted to say that this was the first Bone Awl cassette I picked up and it's still my favorite. I have the new 7" coming in the mail.

Thanks for the posts!

Also, I think you might enjoy my friends new blog:
Can't Stand The 80's
http://cantstandthe80s.blogspot.com/

This is my favorite Bone Awl release.

Bog Bodies was the first I'd heard from Bone Awl.
They seem different from many USBM combos. Their musical aim is somewhat skewed. I'm not certain what that is exactly, but it makes them instantly distinguishable from others (regardless of recording fidelity, too).
Aesop, if I recall correctly, you wrote once that you've seen them perform live?
If so, what was that like?

The recordings are two people, live they were three. I was pretty drunk but I recall they stayed true to the intent.

Most accounts I've read of their live performances indicate that they just sort of stare straight ahead, no frills, eyes on the prize. I hope to check them out during their upcoming tour.

I buy Bone Awl releases as much for the lyric sheets as for the music. Sometimes it's practically like Cormac McCarthy pens their lyrics.

first an indonesian all-girl pop band and right after that a crusty lo-fi BM band!that's why i love this blog!

I remember you describing Bone Awl as being more akin to crust punk and the like than black metal. As someone who has by and large enjoyed punk music a lot more than metal, that may very well be the reason they've become my favorite black metal band of all time with repeated listening. If their live shows take the same no-frills and no-bullshit approach that their music does then I'd like to see them before I end up like the people in the photos that inspired this demo tape. Thanks again!

I missed out on getting a physical copy of 'Bog Bodies', this rules. Thanks Aesop.

_Stoked_ to find another Bone Awl post : )
I first found out about this band thanks to Cosmic Hearse, and they remain one of my favorite CH finds.

Wow. Just wow. I can't thank you enough for these posts.

Kind of conflicted on this one...sounds like some teenagers bangin' out some shitty music in their parents basement(that's kind of a compliment.) The drummer really sucks/the guitar is pretty mediocre but when the vocals kick in it all seems to work. It's like when Cronus describes Venom in the Ultimate Revenge... separate their not very good players but together it's like a brick,or something like that. Bone Awl aren't makin' me cream my stone washed jeans but the more I listen to it the better it gets,kind of.