Keep This Bag Away From Babies 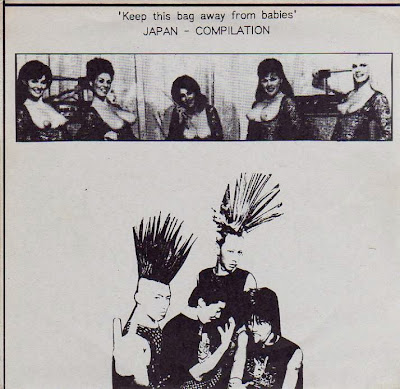 Here' compilation 7" which it rips; Using 4 of the real bands of Japan where my taste excessively is known. L.S.D., Gasmask, Zouo, and Headless. And art of the collage of the strange Dada of old-fashioned [shijiyuukara] titties and Zouo which loads the enormous hair. So sexual intercourse of the just you are surprised. As for these song everything band' So it appeared; The respective release here, so there is no material which is not audible. It works in nuclear sexual intercourse of the flat tire of the Japanese of 2nd layer fear as a still large primer, inhales the murder of rots and roll. FUCK.
耳の強姦
Posted by Aesop at 12:00 AM

This may possibly be one of your best posts ever. And I haven't even finished the download yet.

"So sexual intercourse of the just you are surprised."

Your grasp of engrish is impressive, sir.

Fuck, any record with both ZOUO and some titties on the cover is ok in my book. I really wish ZOUO had recorded more material, though.

I feel honored that one of my rips is used on the HEARSE!

Papst, sorry for not giving you credit, I couldn't recall where I got it from. You are the nuclear rule of death!!!!

no problem Aesop! as your blog's one of my faves, cause of your writings, I feel really flattered that one of my rips is up here!

The feeling is mutual, Papst. Because of your blog I have crossed many long time wants from my wish list. This comp being one of them. The packaging on this one is just beautifully janky.

Your best post yet, I'd say, based on the text alone.

great post, great record (which I got for sale actually)

i got so excited but when i tried to download it-the files were blank! weird

I just dled it succesfully. It's all there. Maybe try again?