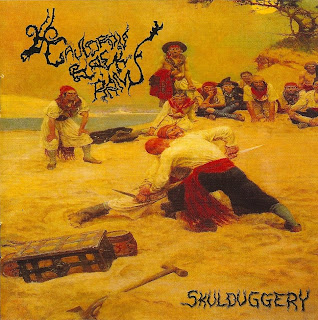 Degenerate pirate Death Metal that has almost as much in common with later Black Flag as with Nunslaughter. Now I have your attention, good. Skulduggery is the first full-length from Australian horde Cauldron Black Ram. This record absolutely floored me with its equal parts primal gut-punch and musical competence. It's been almost five years since its release, I hope this band has more goat-headed stew brewing in their blackened pot. This is highly highly recommended.
Ahoy
Posted by Aesop at 12:02 AM

wow this is really good!!!

Oh, man, this is great. Some of these guys are in Portal, and Portal's awesome, too. But you may have already known that.

Yeah love this one. Two of these guys are also in Stargazer, somehow sounds similar while being in kind of early Atheist/Hellwitch style. Highly recommended wot wot.

Hey Aesop, you wouldn't happen to have the Lord of the Command demos, would you? Same circle of guys from Stargazer/CBR/Portal/Martire/etc.).

Haha, I purchased this - new - for the equivalent of about two dollars. I think I like that fact more than I like the album itself.

I know of Portal and Stargazer but not the other bands associated with CBR.

supposedly they've been working on a new album 'Slubberdegullion' for quite awhile now, it might already be recorded, but I haven't been able to find out any more information then that for over a year now.

Hopefully it comes out one day, this album is really worthwhile and deserves to be graced with a follow up!

I'm hoping somebody can help me out with remembering a tape I borrowed from a friend in high school - it was an album that featured the band on the cover punk as all fuck (perhaps this may be a little vague, but stick with me here), one of the band members had a bright red mohawk which I'm sure must've stood about a foot and a half on his head and there may have been a female member. The music itself - very old school almost thrash punk mixed with Judas Priest-like solos - I may actually have that wrong, but it's as close a description I can recall from some fifteen years ago.

Any help in remembering this album would be great.

Great to stuff. Very old school sounding, but still fresh! Reminds me of a "lighter" Phantasm in a way.

Sephim, sounds like you are talking about Total Chaos, poser band from L.A.

another great one. thanks as always.

Holy shit! Someone who remembers Phantasm.

i dig how the insert says it was "recorded in a fucking cave"! Amazing shit!

Thanks for the tip, I'll check them out although I don't think Total Chaos are quite old enough.

cheers man, i think i might have seen these guys at metal for the brain a few years back, but maybe not... these guys slay, by the way.