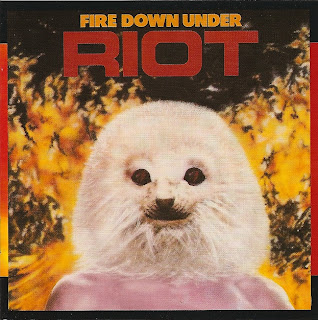 This seal-headed scorcher is the best bit of NWOBHM to come from The Big Rotten Apple, NYC!. Every minute of Fire Down Under is pure, uncut, tight white denim heaven, but the standout for me will always be "Swords and Tequila," a rager that bears a riff later co-opted by Maiden for their own "2 Minutes To Midnight." Lyrics that deal in what rock is about... gambling, broads, cars, outlaw desperadoes, blow, and the altar of the king, baby. Much has already been said about their utterly ridiculous choice of a mascot, a man (sometimes portrayed as morbidly obese) with a harp seal's head, so I'll refrain from saying any more, but seriously, what the fuck were they thinking? How did such a rocking band from New York City manage to create a package that looks so third world and goofy? Either way, this record is still a classic that is not to be missed.
Here
Posted by Aesop at 12:42 AM

Oh hell yes, man! I purchased this one for the WTF cover factor back in high school, and it led me on to the dusty path of America's most glorious under-heralded metal Gods (more so than Manilla Road, Slough Feg, or any other contenders I can think of at the moment). I think every album through Sons of Society is worth a listen, and probably half of those are classics (Narita, Rock City, Thundersteel, Brethren of the Long House, Inishmore all coming to mind...)

It's got that Pen and Pixel composition logic...but for ROCK...

This is a great record! I've always been a bit partial to "Thundersteel", but maybe that's just because it has an even more ridiculous cover...

When this came out my buddies and I didn't even think twice about the album cover; we were just naive metalhead kids and all we knew was the album ruled. It's too bad they didn't make it to S.F. until 1983, after Guy Speranza had left the band:

Thanks for those pics Umlaut. You saw all the killer shows.

Yes, this album rules, and "Swords and Tequila" is miles and miles better than that stupid "Two Minutes to Midnight"...

and I much prefer this Riot to the "speed metal" of Thundersteel. I mean, that one has some good songs, but it sounds really wimpy overall. This has balls. This is ROCK.

Shelby, it was your post that lead to me dusting off this classic and posting it here. And it's a seal not a weasel.

Dude - awesome post! I have loved this record since i was a kid. It was always in the cassette bargain bin. Remember when places would have piles of one and two dollar cassettes? You could find some good shit in there - and that is how i stumbled on Fire Down Under. But now - Swords and Tequila always reminds me of the CW. Someone (Matt or Cobbet?) used to always play that song there.

That song was a CW staple along with Yngwie's "I am a viking" I actually own Fire Down Under on Vinyl, Cassette and CD. I recently gave the tape to Ezra, but he still thinks Maiden and Rush are the only bands on earth.

Thundersteel is one of the best records of metal I've ever listened to, but yes it's a different sort of band by then. I really like this record too.

I think the seal mascot kept a lot of potential fans from listening to early Riot. I can't say I'm very fond of it, I mean, I might say it rules some times but that's just to be contrarian. At heart I think it looks too weird for a band as straightforward as Riot.


especially when they wield a mean ax!

this is the greatest american metal album of the early generation!

I first found this album while A to Z alphabetizing my radio station's entire metal vinyl. This just had the most incredibly fucked up and hilarious cover and I knew I had to listen to it. When I actually did I was just blown away by how truly quality it was, and later on I managed to find it on cassette and it was the beginning of the end for me. Whenever my car ejects my iPod/cd player tape adapter for my car, this is my backup tape. and what a glorious backup tape it is.

one of the first American bands to actually surpass some of the NWOBHM bands and introduce some ideas of their own. These dudes and the Rods ruled early NY metal!

I always thought that thing was some kind of monkey.

I pulled this one out of the collection this morning and I think I have spun it 5x today. I remember buying this one as a kid and just losing my mind and then running around to find every other Riot record I could. Thanks for putting this one out there Aesop and bringing this back to my attention.