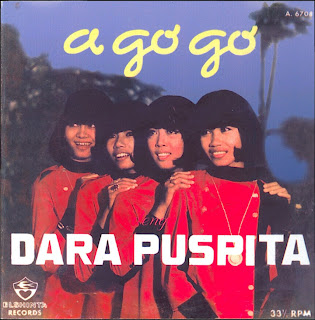 Dara Puspita (The Flower Girls) was Indonesia's premier all-girl garage psych band in the mid to late '60s. The group formed by sisters Titiek Adji Rachman (Titiek A.R.) on guitar and Lies Soetisnowati Adji Rachman (Lies A.R.) on bass, and their friends Susy Nander on drums and Ani Kusuma on rhythm guitar. In 1965 the ladies relocated to Jakarta from Surabaya in East Java to make it big in the dangerous world of Indonesian Rock Music. I say dangerous because, at the time, it wasn't uncommon for bands to be jailed for playing crazy rock and roll. However in '65 the political climate changed and rock and roll was back. Dara Puspita took full advantage of this and played their hearts out until 1972. Their reign of indomitable cuteness resulted in a number of fantastic albums that fetch ridiculous prices amongst collectors. Here is their best known and most heralded album, A Go Go for you to enjoy.
Here
Posted by Aesop at 12:53 AM

Thanks for posting, loving this record at the moment.

Love this, Aquarius is carrying some of their cassettes..SP

Dog I am stoked to listen to this! Thanks, Aesop.

Looks cool but the files seem to be corrupted:

Same problem on my side. Dying to hear this one!

So I rezipped and changed link, but that is about all I can do.

Is there any source for the claim that "it wasn't uncommon for bands to be jailed for playing crazy rock and roll," or do you say so because you think it will give a more dramatic vibe to the music? And besides, "in '65 the political climate changed"--yes, only worse.

I had read about a Jakarta band, contemporaries of Dara Puspita, that were jailed for playing. I do a modicum of research, granted I don't get all John Stossel about it but I don't just throw shit out there for "dramatic vibe." C'mon, man, The Hearse is a bit better than that.

so damn good. thanks!!

I can down load the file and unzip it but there doesnt seem to be anything inside ? its the same with the persona

These two look really cool so I am gutted

Loads of your others are fine no problem.

Forgive me I am a technopleb

Having moved a little green dot in zip7 I am currently enjoying this and the persona.

File seems to be password protected when i try to unzip? Would love to check this one out...