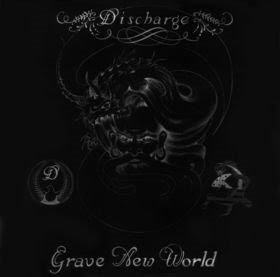 Like Bad Religion's Into The Unknown, Discharge's 1986 album Grave New World showcased an abrupt shift in style and was met with widespread derision and scorn. I'm sure everyone has heard about the disastrous tour where people booed them off stage and, in some cases, pelted them with trash, but has everyone heard this album, formulated an opinion on the record's own merits? Perhaps you have, I don't really know. Listen and reflect in the comments, or don't.
Here
Posted by Aesop at 12:54 AM

There are a lot of bands from the formative days of punk that I am still yet to find stuff by and listen to, there's so much damn music in the world I doubt at age 33 I'm going to get to hear it all, which is why I come to blogs like yours to find what I can't really afford and pick at the gems on offer. I think this gives me an open perspective on most music, especially bands that had supposedly turned their backs on their fans with particular albums. Usually I find that I don't see what the big deal is when bands decide to try something different. In short, I'm definitely getting this, I'll let you know how it goes.

I actually like it and have since I bought it in the late '80s. Is it the old Discharge? No.

If you compare this one to their previous output, I would say that this one is right up there with Cold Lake. As a stand-alone album, I just think that it is too weak. A gutsy move none the less, just like Cold Lake.

if the vox were a bit different I would love this. More bands that ape discharge need to ape the "Price Of Silence" era though, I would be stoked on that.

Thank you so much, i have been looking for this for a while i had it before my hard drive took a shit and destroyed all my music, now i can bask in the glory that is GraveNewWorld.

My friend Joe helped heft a trash can at the Farm.

What did he know? The last time I saw him he was living above Santa Cruz and listening to trance music.

die kreuzen made pretty much the exact same mistake as discharge here. imho, at least change the name of your band if you're doing something like this. it makes me wonder if they were trying to create an mtv-friendly product. $

excited to hear this...people have always trashed this which made me want to hear it even more. almost bought the LP once but passed it up. guess this is a sign i need to hear it!

dude this album rules!! i got this on vinyl fucking hilarious!!!

"this is sate control this is rock n roll"

Nick, I think it was posted way back at the beginning of the hearse

unless you labeled it differently. the only other DISCHARGE you have posted is The Nightmare Continues. maybe i'm missing something. whatever

Don't know which of the many live Discharge bootelgs it is.

thats not a bootleg. the Garden City New Jersey live 1984 was released in 1989. it's on wikipedia

no where near the OG discharge stuff but i'm down with this album.... its way better then Cold Lake...

Mmmmm...I still don't like it. Some of the the riffs are pretty good, there's never been any doubt about that. But it's those vocals. So bad. So bad. The Downward Spiral should have been the title for the LP. I think the problem they faced was that they were too good at being Discharge 1981 that they were put into a corner. Keep doing the same thing over and over again so that your small following will continue to dig you or keep writing what you like as you start to learn how to play your instruments better. They chose the latter (to their credit) and it just turned out to be poo-poo. Still, it's better than anything Metallica has done since 1986. And why does everyone hate the latter Die Kreuzen stuff so much? At least they had their own sound. Sheesh

I'm no Discharge expert, but I dig "Hear Nothing..." and I gotta say...I don't hate this. I mean, sure...it's WAY different...but it's a good listen. You just gotta take your mental associations of what "Discharge" means, and put them on a shelf. This isn't gonna satiate the same part of your brain. And I love over the top vocals, so this is great. Cheers.

this was my first Discharge album,the good albums were always way over priced imports,one of my older Okie punk friends said he saw them during this phase,of course he hated it...Mike

I absolutely love GNW... always have, but I agree with Jesse - more bands need to ape the "Price Of Silence" style Discharge. I too would be mighty stoked to hear that!

This album is hilarious in a not so funny way. Almost as if Discharge had spent too much time in the sunset strip, or as if they had been gang banged by Britny Fox.

Verdict: I'd forgotten your write-up for this album, but as soon as I put it on immediately I thought "1986". Absolutely brilliant album, still punk in the same way DRI held onto punk when they went completely metal, brilliant high bridge solos, and a voice that if this were a metal album would be totally out of place. Once it was done though, the first band that came into my head to play next was Pantera - Cowboys From Hell.

I'm sure it's completely different to usual Discharge, but I'll need to hear other stuff before I can say if this is a bad thing.

THIS IS AN ABSOLUTELY BRILLIANT ALBUM.

I like the vocals above all else. Even as far back as 1983/84 - listen to the live boots - Cal was experiementing with his singing in choruses, in retrospect it is clear he was looking for the the now recognised Grave New World style of singing...

1983 (arguably 1984) was the year of climax for the classic Discharge that we all love (before all important members bar Cal left the band, coinciding with the second US tour, and the first maxi-12"s with remixes and extended parts etc) - this was a point where the band had been "shouting screaming" in the same way since 1981 -3 or 4 years- meanwhile tons of other bands (Anti-Cimex for e.g.) began to almost out-Discharge Discharge if you know what I mean...the progression towards Grave New World for Discharge is in retospect prefectly logical, hell it even makes sense.

As for Discharge post-Grave New World, now that's where people should identify the true fall from grace...I bought a massacre divina t-shirt for fun, I plan to wear it next time I go see Discharge...ha ha

Also for fans of the style of singing or the GRN era Discharge, trust the Japanese to get it right, check out the band: FINAL BOMBS.

Final Bombs are amazing. I truly like them and was thinking about asking them to do a split w/my band.

The singer in my band met Bear Bhomb (singer of Final Bombs) and Bear Bhomb told him the ONLY records he owns are by Discharge, Venom, Motorhead and Disclose. Sounds like a true hero to me.

Never could latch onto to this platter. Try 'Forward Into Battle' by English Dogs - those young british beasts did metal to a T. You won't be disappointed I promise.

This is My favorite dischare record, no joke.

I remember seeing them at the Farm in SF when they released this album. It was with Attitude Adjustment, Possessed and DRI. Following DRI was not a good idea for them. A totally let down. They deserve having crap thrown at them.

It was a mean show regardless. I got bruised standing five feet away from the pit and I remember some guy with leopard hair who kept hopping on stage to get a running start to trot on everyone's heads. One of the stage hands eventually told them only five people could be on the stage at a time and to stop climbing the speaker stacks and jumping off. I was a little kid out from Merced to see the show so it was quite the eye opening experience for me.

This was the first discharge thing i bought in a shopping mall when it came out. I was alreay listening to the damned and gbh at that point and had been in to metal before so needles to say I wanted punk so i hated it the second thing i bought was the ep after bones left aliitle better but not great. so I missed out on these guys in my skate punk teenage years. i have just discovered them so im like wow...the best better than conflict crass subhumans put together..what a great thing to find at 35. them and GBH are my faves these days with a cupof strong black coffe in the morning I have found enlightenment.

I know these guys had hit the zennith pretty quick.whatcould you do. then the lies of metallica make the dough sad. but they are the best its a shame they dont make it on to those top 100 rock album of all times lists snhnsn is 10 times better than the clash or never mind the bollocks

This was my intro to Discharge and I hated it. It sounded to my teenage ears like the type of metal stuff I had moved on from four years earlier. I love it now. The thing is, it sounds like the music is wearing drag - just like Celtic Frost's 'Cold Lake'. It's basically the same as their classic material, form wise, it's just wearing lipstick. Like all they thought they had to do was throw on some hairspray and rouge, employ some whiny vox and whip out some guitar wankery every once and a while and the babes, bucks and blow would just roll right in. Awesomely cynical.

i think tom g. warrior was trying to do what danzig and the cult did a year after that...i think he wanted to make a sleazy,dark,l.a. type album,like some bukowski kinda thing

its only listenable for kitsch value

and the live stuff after bones is iffy,that pooch guy or whoever he is sucks at playing guitar in discharge live

i love Discharge and if this album was released under a different name people would be slobering to own it!