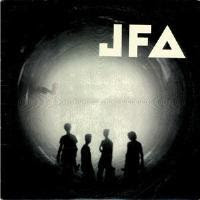 I said pretty much all I can say about JFA here, but I might as well recap. JFA skated and played punk songs about girls and beer and skating. However, unlike other "skate bands," they played really well and their knowledge and appreciation for music of all kinds helped inform an eclectic sound all their own, topped with Brian Brannon's hoarse and desperate wail. This was their magnum opus and their second full-length LP, sometimes called Untitled, sometimes called JFA. It's a weirdly dark record to come from a bunch of sun-drenched skate rats from Scottsdale, Arizona. If you have never heard this or haven't in a while, I strongly urge you to. It's brilliant and I hope it won't be forgotten as it has yet to be reissued on any format. Why?
Here
Posted by Aesop at 12:03 AM

soooo good. isn't this on the discography cd? someone should really reissue this on on vinyl.

This is a great record and seriously under-rated. What the hell was in the water (or lack of it?) in Arizona back then? JFA, Feederz, Mighty Sphincter, Sun City Girls,...? Hot shit indeed...
Thanks!

I believe the "We Know You Suck" CD has the blatant localism EP and the Valley of The Yakes LP and a few random comp tracks but ends there. I could be wrong though, I don't own it. Those releases are great but what about someone releasing a CD with this and the Mad Garden and My Movie EPs as bonus tracks? How about it, Jello?

Damn...I had sort of forgotten this record. I remember I had borrowed this from a fellow skatepunk circa 1987. I haven't heard this in about 20+ years. Right off the bat the look of this record amateurish/archaic/valuable to me, how the highlights of the cover settled only to a pale yellowish off-white ("acid-damaged" of another sort!), the subtle moire effect over the cover photo (probably lost when viewing on anything but the LP), the 50ish mod line art pattern on the back...

And the recording...how many punk records were recorded drenched in sixtiesish reverb?

I still remember the psychedelic guitar into to "I like girls", and how it put such a weird moody slant on my punk/HC mind, but in a way totally different than goth records I knew.

LOVE LOVE LOVE this album. My first introduction to JFA, I remember being so excited to find this slab used for like $5. My teenage mind was blown!

I couldn't agree more with you Aesop!

Yes, two of my favorite things: skateboarding and punk rock. So good. So much better than the OC pop/punk garbage that usually gets associated with skating. These guys, Los Olvidados, Drvnk Injvns, most of the shit from the old Thrasher Skate Rock Comps. Thanks.

I am interested to hear this, this band was only ever an ad in Thrasher magazines to me but I liked their logo...

I've been catching up on a lot of great music that was formally only represented as really cool T-shirts. Australia in the 80's was a very different place to what it is today, and I am no longer under 13 years old.

Cheers for the good work and great writing
Ilf

I don't know if I'm stating the obvious, but "Deltitnu" is "Untitled" spelled backwards. And accordingly, the audio track for "Deltitnu", is the "Untitled" track played in reverse.

I'm also surprised no one has mentioned the file for "Deltitnu" is actually that and the next track ("Tentpeg") together in one file...and "Tentpeg" gets repeated over as it is also the next file. But...not going to complain about something that is free. Just mentioning it if someone wanted to fix it is all.

Thank you, thank you, thank you for this one! This blows away everything on the "We Know You Suck" cd - it must be the definitive release for JFA. Great songs, and as you mentioned, I love the overall dark feeling on this record. Two thumbs up!

This album was released on cd back in the early 90s (I actually have a copy of it). It was released together with the "Mad Garden" EP. The same year, they released another "2-fer" CD, the "Valley Of The Yakes/Blatant Localism" records on 1 CD (I have that one too). Great stuff, I always loves JFA.