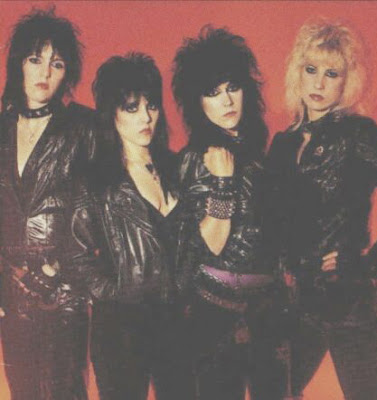 Don't you want to party with these dangerous broads? Yeah, I thought so. Jaded Lady arose like a phoenix from the ashes of Leather Angel (whom you've also never heard of). They were a popular LA club act and even appeared briefly in the documentary Decline of Western Civilization: The Metal Years. Their brand of chick-metal is perfect for a night on the strip with your best gal pals, drinking peppermint schnapps and being young. Sounds pretty fun until a gang of young toughs called The Scars nearly runs over your deaf mute sister. Then it's game on. You and your girls steal their ride and then leave it trashed for them to find. The Scars enact a terrible revenge...the rape of your innocent deaf mute sister. Oh, but it doesn't stop there. They also kill your best friend just days before she is to marry her high school sweetheart. But you aren't the type of girl to take this shit lying down and you come back on these motherfuckers like leatherclad, crossbow-wielding valkyrie. Wait, I think that's just the plotline to "Savage Streets", that '80s movie with Linda Blair and Linnea Quigley.
Here
Posted by Aesop at 12:00 AM

What????? I HAVE that damn Leather Angel album - I swear the cover is exactly the same. And the music is fail!

Also, the random text which I had to enter to post this was: WHALOR.

Got me thinking about that Doom band, AHAB. If a band could be as heavy as Ahab and yet have big hair like Leather Angel, then the situation would be CHOICE.

This is the demo and it had no cover so I lazily just used this Leather Angel promo pic.

The chick that is the second one on the left looks like a skinny Rosie.

Lady third from left looks like Nikki Sixx (as long as he shaves that damned "soul patch").
First lady on the left unfortunately looks like any of the guys from Hanoi Rocks (except the blonde guy).

Cannot recall this band from The Metal Years, though. I even watched that recently. All I can recall:
-Chris Holmes drunk in the pool, in full gear, with his mother on the patio.
-Ozzy Osbourne spilling orange juice (allegedly a put-on for the cameras).
-The letcherous club owner sleazing around some bimbos.
-The delusional band from Detroit performing an utterly unmemorable song. Also, every band member filming their interview while driving around in the same convertible.

I just put Savage Streets in my Netflix queue.

It's hard to remember much about Decline 2 other than Chris Holmes. You won't be disappointed by Savage Streets.

The Scars I know is that Scottish 80's New Romantic band (who I actually thought were pretty good when I heard their album - Author Author?)... anyhoo can't imagine them raping anyones little hyperactive sister - but there you go...

oh and did I mention how much I still love that fucking YDI album you posted?