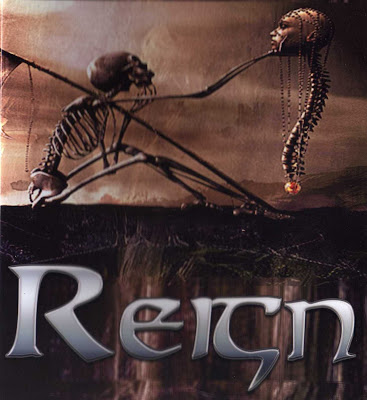 Cosmic Hearse reader and friend, Jay Harlow, was cool enough to share with us his old band Reign. Jay now operates the very excellent Black Metal band, Jabladav. I decided it best to let the man himself give you the lowdown on Reign . I'm taking the day off to catch up on some schoolwork. Thanks, Mr. Harlow, and if any other readers want to share their band with us send stuff (graphic included) to joinedattheass@hotmail.com. If it's to my liking it'll turn up here eventually, be patient. All submissions will be listened to in full.
Reign was based out of Winston-Salem NC and lasted from 92-94. NC was kind of a hotbed of its own at that time with COC blowing up and killer bands like Messiah/Confessor/Perpetual Iniquity and False Prophet to name a few.The internet basically didn't exist in our mindsets and everything was word of mouth and all the bands listed above were super competitive so it really was exciting to be part of that scene. No one tried to sound like anyone else and I think that was what put Reign apart from those other guys. With that being said, Wanting a band to sound like early Fates Warning/Queensryche wasn't a very in vogue thing to aspire to. We didn't really tour outside of the Carolinas due to our drummer was/is a professional photographer and wasn't really into cramming in a van and living off McDonalds. At this point Shane Puttman the vocalist starting sending out tapes to Confessor when Scott(Confessor) left to tryout for Watchtower! and Shane was also contacted by Kurdt Vanderhoof to tryout for his project. As you can imagine, finding a singer with Shane's range wasn't something you were going to find in the Carolinas. Things kinda feel apart after that with Gurnge blowing up and I wanted to tap backing into my punk roots. The bassist and I started a band called the Swinging Richards(not knowing the gay reference DOHH) we just thought of ourselves as dick-heads. That didn't last long and then I got into a jazz band called Branch Quartet. We recorded a demo at NC school of the arts and then the drummer and cellist moved to CA where Blake(drummer) teaches at Cal-arts now. During that time I was really into Mick Karn the bassist and me(JA) and the drummer(BLA) and guitar player(DAV) would jam when Gwen was gone and that was how the JABLADAV name came about. So that is it in a nutshell.
JH: guitar/backing vocals
Jon Pugh: guitar/vocals
Shane Puttman: lead vocals/keys
Jeff McMahan: bass/backing vocals
Dave Admundson: Drums
Live master DAT tape soundboard recorded at the now gone ZIGGY's Nightclub.
Here
Posted by Aesop at 12:10 AM

Sounds great. Everybody in the bands fits in great. Kinda tragic though that a band that was so talented was destined to fail.

Only one comment? To quote the Hearse, "Don't be a fuckwit and leave feedback". I would really like to know what you think. We were super proud of this band but never made it in the studio.

Many people download and don't comment, and some take a few days. It's great stuff, you should be proud.

Excellent metal, especially the guitars and vocals. Technical without ever getting too mathy or boring. This sounds great for a live recording, too bad no studio tracks exist. Would have made an great bill with Watchtower, or maybe Coroner.

Seems a really talented outfit and you should be proud, yes. Shame about no record. Thank you for sharing.

Well Jabladav, to be honest, it just isn't that good. To be fair though, I couldn't do any better.

Anonymous-Thanks for the feedback.To the others, thank you for commenting and expanding on your thoughts of why you liked or didn't like this material.Hope you enjoyed this as this was the first posting of this material on the web. Thank you Aseop for letting me share the tunes. Glad you like them and hope the rest of you do to. -Jabladav

This shit rules ! ! !
Hails Jay and REIGN
The keys souind great. the vocals are amazing - very classy and tons more range than almost anything I can think of. Not to mention you guys are tight as hell and the recording is album quality.

p.s. i know confessor, but not Messiah/Perpetual Iniquity/False Prophet. would love to hear these. ever get into honor role/ ladyfinger / butterglove continuum ?

how far is w-salem from Raleigh ?

ah..Pens bands? If you know Honor Role and Butterglove, I would suggest you find Loincloth's ep post haste! It has the drummer and bassist of Confessor playing with Pen. It is the shit! Loincloth was a band that Steve(Confessor) put together after Flymachine didn't work out.(another great band from NC). Messiah were from Greensboro and I believe you can find there two demos on the web."In the Flesh" and "Look upon the Cross". Perpetual Iniquity were based out of Jamestown NC and really is worth the time to hunt down. I think I sent Aseop a copy in the mail about a year ago, maybe if you ask really nice he will put it up on the Hearse. Thanks for the feedback. Shane Puttman did a great job on vocals. I remember having him try out for us and trying to keep a straight face when we told him we would have a band meeting to discuss if we thought he was good enough.

oh, Winston-Salem was about an hour drive to Raleigh.

Just a little southern trivia for you, when you ask someone from the south how far a place is they will tell in time,not miles.

The more you know. -j

I see I used the wrong use of "there" when it should of been "their" when commenting on Messiah's demos. Pre-Back off Grammar Nazis! -j

yeah - I have the Loincloth 7". ripping. my buddy from Raleigh is busy getting his "Richmondy" analog files (audio and video) digitized. i was surprised he'd never heard of those bands you mentioned, cuz he was broes w/ COC and Confessor and shit

so were you pulling Shane's leg about the audition?

some of the songs run together.
Pen is mightier than the sword !

big Carl...I'm trying to tell you, the NC scene at the time was/is as valid as the bay area thrash/seattle grunge/ny punk in the history of music and I am/was glad to be a part of it. I was really bummed that COC got like 4 seconds on the AMERICAN HARDCORE DVD.

Maybe one day I will have Aseop post the ASYLUM live show that was my thrash band before REIGN. Some 90 boring trash.

Infernal Heirarchy 7" the is MUST have shit!

DeadHorse-I have really no info on this other than they FUCKin rule and the vocals is a mix of Venom and punk, ie RULES.

I'll keep you updated if I come across more.

...and no, to answer your question we did not pull Shane's leg. In our weak attempt, we wanted to keep him humble.

Thanks for the feedback. -j

This is incredibly cool shit. Reminds me a bit of Mystic Force, another proggy US power metal band who hit the scene a little too late for their own good.