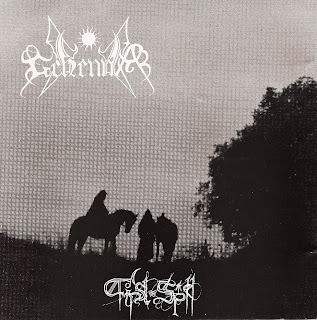 Gehenna's 1994 EP First Spell is a classic bit of second-wave Norwegian Black Metal. The use of archaic keyboard sounds over the top of the plodding mid tempo riffs sets this apart from the herd. The '60s church organs on opening track "The Shivering Voice Of The Ghost" are to die for (check the solo that begins roughly at 2:09). Sadly, Gehenna didn't really follow this path with their first full-length Seen Through the Veils of Darkness (The Second Spell), which is a decent enough album but fails to hold the magick and mystique of First Spell. This was when Norwegian black metal was new and exciting, before it was fully realized, when the deranged fumblings of pasty disenfranchised Scandi teens made for great art with depth and distance. Fall under its spell.
Here
Posted by Aesop at 12:00 AM

Classic posting as always. How could you not buy this with that great cover?-j

bad ass blog you have here!!!

It always make my day when I check the HEARSE and find something like this. Thank you for the great music.

thanks!!! Great blog, reign and hails from dusty Oztralian clouds

another band i'd heard over the years but never really gotten into... leave it to you to find the one standout release that'll really get my attention. great stuff, as usual. thanks man.

The rest of the EP is good, too.
It's nice to hear decent melodic BM.
Seems to me that many of the contemporary bands shy away from strong melody. Then again, maybe I'm not looking in the right places.

Thanks for reminding me of this. It somehow went from being one of my favorites to getting lost in my past. Now it's back with an organ vengeance.

Killer album. I have always appreciated Gehenna, Adimrion Black and Murder are my favorite albums. They seem to evolve or change sound with every release so you can't expect them to sound like the last album.

I prefer the Swedish band with the similar name "Gehenneh" with the "H" on the end. More Venom/Warfare/Motorhead worship with songs like " Bitch in a Bullet Belt", "Kings of the Sidewalk". The Norge band is Ok, but thats just me...
-Mike IX
EyeHateGod
Outlaw Order 00%
Arson Anthem

One of the very few "keyboard based" Black Metal records I totally adore. The whole atmosphere is timeless and sets this apart from most other Black Metal recordings. I wish they had created more in this style, because to me they failed afterwards in creating rawer faster Black Metal and just started sounding boring and somehow pointless.