Have a Little Faith 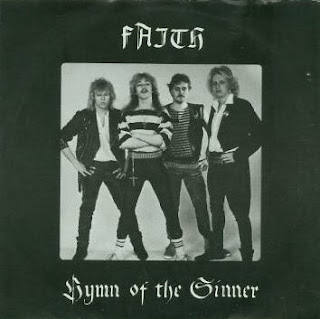 Cosmic Hearse reader and friend, Nick, hooked me up with another lost Swedish metal rarity that was on my wishlist. Faith released this totally killer seven inch of doomy classic metal in 1986. I think some members were in Stormbringer who appear on the ruling Metal Knights comp. At least one member of Faith went on to join the band Mercy, the pre-Candlemass gig of Messiah Marcolin. This EP has two songs,"Possession" and "Hymn Of The Sinner" I can't decide which I like better, but why would I have to? Seriously, get this. Thanks, Nick.
Here
Posted by Aesop at 2:33 AM

Nice pants tucked into the socks lol. This is great...thanks Aesop and Nick.

I see hipsters in SF dressing like this. None of them ever made anything as cool as this record.

I'm kinda waiting for rick moranis in "The Wild Life" to be standing in the back ground rocking his Chess King gear. Oh, that would be a great Cosmic Hearse release of all that killer EVH soundtrack. "blow'em away!"

Argghhh! I used to live neighbour with Andrij "witchking" Veljaca when i was a kid. Mercy rehearsed accoustic in their garage and it sounded horrible. That dude started the first metal-store in our comfy little town and started the total-rip-off record-company Sweden Records (if my memory serves me). He went bankrupt and started selling donuts and bootleg-shirts at the local markets. I used to work at his store and got paid in records, amongst them the Godflesh Pure-album which i hold dear to my heart. I will get and listen to this album, thanks dude!

so,so great!thank you Aesop for another rare heavy metal gem.

As if any of those hip kids could look any good in a tailcoat. Ta for this one, Aesop - been after it since DaN @ The Corroseum reviewed it.

holy crike, this is pretty good. have a bit of an issue with the vocals at times, but otherwise... I like this better than any Candlemass stuff I've heard.