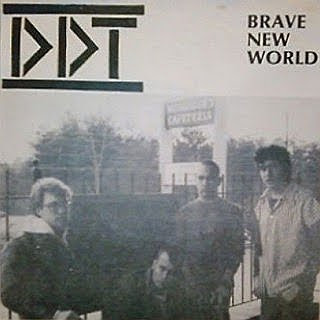 Brave New World, in addition to being a futurist novel by Aldous Huxeley, is a punk record by an obscure band from Atlanta, Georgia called D.D.T. They kick things off with a bouncy cover of "Mr. Rogers Neighborhood," very cute. "Girls Girls Girls" follows, a weird hardcore number where the singing dude spits forth a staggering amount of lyrics about his bad luck with ladies. The title track speaks of a myriad of modern ills in under a minute. The most interesting track is the more post-punky number "I'm Walking Down the Psychopath." This delicious EP wraps appropriately with "The End." D.D.T. crammed a lot of information into an eight minute record. Brave New World was released in 1983, the band followed up in 1984 with a great LP called Broken Toy.
Here
Posted by Aesop at 12:11 AM

"Walking Down the Psychopath", ha. Thanks!

Hey Aesop,thanks for this!I have the Broken Toy LP posted at my site http://sluggisha.blogspot.com
thanks again! -G O D

Great post, this band is completely new to me!

Used to see them all the time at the Metroplex in the 80's. Always put on a great show. 'Carlos' and 'The Vein' from the Broken Toy LP are absolute MUSTS for fans of early hardcore/metal crossover. This little EP is fun too. After DDT most of the members (with new singer) formed the even more metallic Threshold of Pain. One cassette release.