4 Bands That Could Change The World 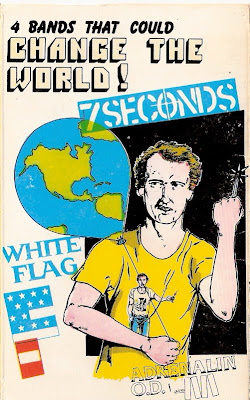 The four bands that could've changed the world (and ultimately didn't) were 7 Seconds, F, Adrenalin O.D., and White Flag. This was released as a tape and an LP in 1987 by Gasatanka Records, which was the concern of White Flag's singer Bill Bartell. The proceedings kick off with 7 Seconds, who never changed the world, but did change into a shitty U2 type alterno-rock band around the time this material was recorded. If you really want to endure the pseudo-reggae version of "Walk Together Rock Together" be my guest, I am skipping it. Next up is White Flag, and for all the derision this band reaped with their terminally jokey attitude and constant desire to fuck with the "rules" of punkness, they were a pretty great band, however this is material doesn't really demonstrate that fact. Next up is F, who I have boldy claimed were one of the greatest hardcore band to ever come from Florida and maybe the USA, but again, the material they contribute to this comp is pretty forgettable. Interestingly enough, the cover art was provided by F bassist Eddie Nothing and shows F singer, Phil, about to stick a pin in a world balloon. Adrenalin O.D. turn in some lame covers and a poorly recorded live version of one of their best numbers "Rock n Roll Gas Station." So basically what we have here is four great bands showcasing their laziest, most uninspired material. Not sure how anyone involved thought this was a good idea or even remotely world changing. Why the hell did I even post this? Cosmic Hearse has jumped the shark.
Here
Posted by Aesop at 12:31 AM

I never, ever thought I would say this about a CH post but, this sucks.

Ha ha, you've gone rubbish. Next you'll be uploading SSD's 'Break It Up'.

Hickey did change the world.

Ha ha-- too effin' funny. I used to work with one of the dudes in White Flag at the UPS in Anaheim back in the day. He seriously thought he was G.G. Allin just about to be discovered. DOUCHE!

I already have some of these. I'd like to add, though, that Hardcore is punk no matter how it's served. I molded that shit in the 80's and kept my environment small when I did. Not that it matters, but, 2 thumbs up...

for some reason i really like this post....not the album in question, but the honesty in the write up. man, did 7 Seconds start to suck...new wind and up...brrr...gives me chills thinking about that crap.

I used to work with one of those fools from White Flag, at UPS in Anaheim. He seriously believed with all his heart he was the next G.G. Allin. There is no "next" G.G. Allin. Douche!

I think 'Soulforce Revolution' is a really great record. Then again, I am from Oklahoma.

i think that one guy worked with one of the fools from white flag at ups in anaheim.

but i could be wrong.

Nobody in White Flag ever worked for UPS, in Anaheim or elsewhere. Who are the fools?

i remember hearing hearing this and thinking meh. didn't bill bartell wind up in the melvins at some point?