Say No To The Devil 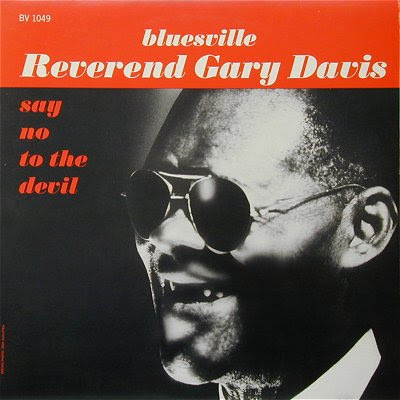 Despite having three teeth and no working eyeballs and a life that was harder than Chinese arithmetic , Reverend Gary Davis still loved his Jesus. Gary was born in 1896 in South Carolina, he was the only of his mother's eight children to survive to adulthood, and he lost his sight before he was two. His father was killed by a cop in Birmingham when Gary was just ten. In his late twenties, Gary up and went to Durham, North Carolina, which was sort of like the Williamsburg of it's time for black folk who wanted to "make it" playing the blues. It was there he struck up a friendship with another sightless bluesman, the ever-randy Fulton Allen aka Blind Boy Fuller. Fuller introduced Davis to the heads of The American Record Company who immediately set to recording Gary Davis' unique voice and picking styles. Around this time Gary became an ordained minister, motherfucker loved Jesus. By the 50s the Durham scene was on the wane and Gary relocated to New York. While there, he experienced a resurgence in popularity from New York's hippest of caucasian folkies. In 1962 he dropped one of his best recordings, Say No To The Devil. On this brilliant record Gary warbles and wails about the various evils and temptations the devil uses to fuck you up, the wonders of an awaiting heaven, and of course how much he loves his Jesus. Really, the blues just don't get much better than this album full spindly guitars, and Gary's distinct ashen voice giving stolid warnings of the perils of hell and damnation. Satan is a fucking dick.
Here
Posted by Aesop at 2:14 AM

Wow. Powerful stuff. This man does not fuck around.

This sounds interesting. Forgive my ignorance but, Williamsburg?

amazing! thank you a ton, man! great release! much appreciated!

The Reverend just destroys a 12-string! A snarky music nerd from Syracuse introduced me to this man, and man was he good. If you haven't If you haven't watched him perform I recommend the "Legends of the Country Blues Guitar Vol. 1" DVD. Don't have this one, so thanks a bunch!

this is why i love this blog.

"motherfucker loved Jesus" this is why i love this blog.

As much rural and urban blues (from the 1920s up)as I listen to and love you would think I was a big fan of RGD. Alas I am not. However I'll give this one another listen. I got this on vinyl the same time(mid 90's) I got the Blind Boy Fuller album you posted earlier. Hmmmm.......

Satan is a dick. This album is fucking great.

Thanks. This was nice to read.

Damn. Powerful stuff. I love it!
Why isn't he more popular?

The Diary of a Milkman said...

Great stuff. Makes me think all musicians would be better off blind. Well, maybe not drummers.....then again...