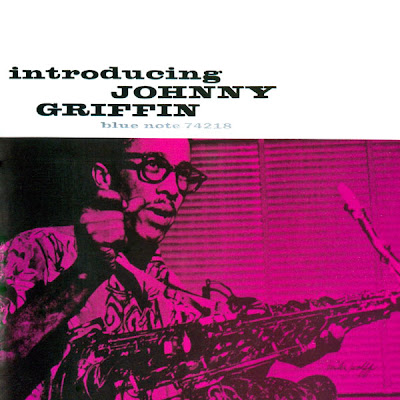 Johnny Griffin was a shredder, when he came on the scene in the early '50s people were astonished at his speed and dexterity. Blue Note scooped him up and put him in the studio in 1956 for his first date as a leader, the result was this record, Introducing Johnny Griffin. In 1957 Johnny joined the Jazz Messengers performing on the Messengers session with Thelonius Monk. Monk so impressed with Griffin, gave him the slot vacated by John Coltrane in his own Five Spot Quartet. Griffin was an adept player, fluid, and ridiculously nimble, even on this, his first session as a leader. Introducing... features six standards and three excellent Griffin originals, an excellent rhythm section of Wynton Kelly, Curly Russell, and Max Roach, and of course, that excellent Frank Wolff photograph of Johnny Griffin at Van Gelder's studio rocking some kind of crazy loud shirt and talking smack. Get this and get to know one of Jazz's most underappreciated shredders.
Here
Posted by Aesop at 12:57 AM

Right ON Aesop! This is an amazing milestone album. Great to see you including such masterpieces.

Wow! Art Tatum of the sax. Why you think he was overshadowed? Just too many giants at tenor sax during that period? Thanks for posting Aesop.

Not I my friend. I never really liked this one... But thank you anyways...

That's how I want things to be... My black metal & d-beat crust right next to my avant-jazz and hip-hop. Cheers.