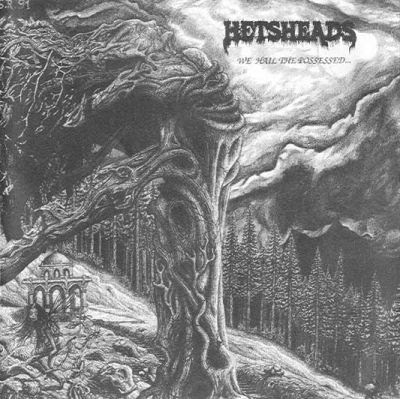 Hetsheads started their run as a jokey Swedish hardcore band in 1988 under the awesome moniker of Hetsheads with Hetsfaces and the Fuckfaces of Death, but much like Hearse favorites BLOOD, Hetsheads eventually decided to play the morbid Death Metal that was rising in popularity at the time and the clumsy name was shortened. Throughout the early '90s the band made a few recordings but only released one limited demo called Remonstrating the Preserver. In 1994 the band called it quits and some members went on to form the infinitely more polished Blackshine. In 1994 Repulse records stepped up and released this CD containing the demo and a few extra tracks. It's Swedish Death Metal, so you should already have a pretty firm understanding of what Hetsheads sound like, the shocker is that these kids were really fucking good. We Hail The Possessed holds it's own against some of the better known records of the genre. Blow the dust off this obscure relic of ancient Scandi-death and hail the Hetsheads.
Hail!
Posted by Aesop at 12:38 AM

I get a lot of cool stuff that I haven't even heard of off of your blog. This one and the Plague stuff just knocked my socks off. Keep up the good work.

holy shit this band is rad. love the sludgey parts. love the drums. likely this will be on heavy rotation for a while. wish they were still around... thanks!

I bought this as a double release (with Dementor - The Art of Blasphemy) in "Cheap books" store for 39Kč (about 2 USD) and I didn't find it worth even that small prize... But the fact that you posted it will probably force to give it one more spin. Maybe I just missed something.

Yes! Some more Swedish death metal...time to strap on the ipod and turn it up! Thanks again, Aesop

This may be the most consistently high-quality blog I know of. Cheers.
M.