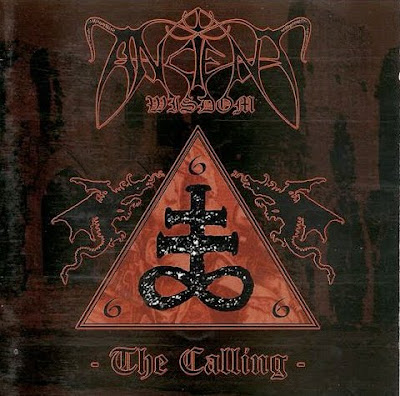 I guess it was young Marcus Norman's calling to make Satanic Black/Doom/Death Metal as an entity known as Ancient Wisdom. Mr. Norman cut his fangs as a member of the early Swedish Black Metal band Throne of Ahaz. As the logo suggests, Ancient Wisdom was originally called Ancient but added the wisdom upon becoming aware of a Norwegian band also calling themselves Ancient. The Calling was released in 1997 and is the band's second, and best album. Not really Black Metal, not really Doom, not really traditional Heavy Metal, but managing to incorporate all those styles into the fold without sounding manic or confused. The songs and pedestrian Satanic atmosphere of The Calling are so damn delectable that the album can't even be marred by some pretty terrible tones. Another great album to play loud at your next party.
Here
Posted by Aesop at 12:11 AM

Just listened to this for the first time.
The Awakening Of The Ancient Serpent is truly awesome. Total agreement on the substandard tone...

You should write a book - Aesop's Encyclopaedia of Little Known Audial Awesomenesses...
You could work on the title, obviously.

Thanks for the continued enlightenment.

I actually meant 'At The Stone Of Ancient Wisdom', not the intro. Duh.

Suspect that playing this faster would yield a sound resembling sub-standard Dissection or Sacramentum. Drums are awful; Neo-classical 'art' pretensions unbearable as are the spoken word bits. Unless the party-goers are Cradle of Filth fans this would clear most rooms instantly.

omg, finally an 'obscure' album that I already had before you posted it :P haha
Normally I'm a 'fuckwit' who never writes anything, normallly cause I don't know what to say. Massive thanks for this and all the other uploads been following the blog for the best part of a year, seriously digging the jazz as well

Add this to the plethora of great 90's dark metal releases.

I skipped ahead to 'In the Profane Domain of the Frostbeast'. And I was not disappointed.