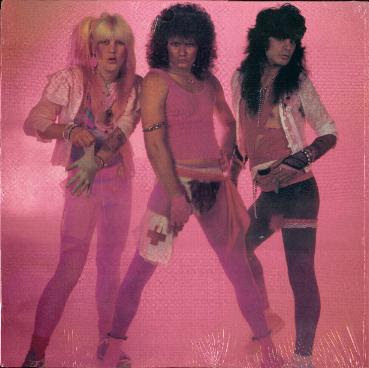 If AIDS was a record it would be Dizzy Bitch's 1986 LP In The Pink. Even the title is gross. And if that wasn't enough, the three petri dishes that made up Dizzy Bitch had names like "Tim Tation," "Hondo Blackout," and "Johnny Lust." I think these guys may have been from Vegas, which would make sense, but I really don't know, and surprisingly, there aren't tons of Dizzy Bitch fan sites cluttering up the interwebs. Even though I could probably write a tome on the band's aesthetic choices and missteps, let's talk about the music, shall we? The album opens with Dizzy Bitch's theme song "Dizzy Bitch." Immediately you are taken by the wafer thin guitar tones, the spunky clunky drum performance, and the nasal vocals of one of these shameless gender-bending poppinjays. The follow up track, "Insane by Mother," is a mess. Next up is "Goin' Down" which I am going to go ahead and assume is about a particularly memorable blow job. Oh, check it out, I was right. Halfway through and we get the perky party anthem "Double Time," in which Th' Bitch (as fans called them for short) address the perils of rising to the top without compromise. Interestingly enough, they also address their stupid name in the song. Things get serious on the next cut, "Don't Push The Children," not sure what the point behind this one is. Who are these children and why would we push them? Finally, in the album's close, we are urged to rock with Dizzy Bitch and their song "Rock With Me." Problem is nothing here really rocks and I wouldn't want to even share an elevator ride with Dizzy Bitch, much less rock with them. Jesus fuck, with this and the last post I am starting to wonder if the Cosmic Hearse even gives a fuck anymore.
Pink
Posted by Aesop at 12:14 AM

This blog has taken a scary turn lately.

Is this a subconscious ploy to wakeup fuckwits such as myself? It worked. The Hearse, in my opinion is awesome. The daily entries show you do care and your work is greatly appreciated. I have heard some amazing music I would never had if not for the Hearse. Please keep giving a fuck and carry on.

what do you think the dudes in Dizzy Bitch are doing right now?
i don't mean like in general what are they up to, but what are they doing this morning? like what did they have for breakfast, and what are they looking forward to this afternoon?

gotta love the bitch! it's great because it sucks! thank you for this. never heard of it. that's exactly what i love about this blog; some blind dude that plays the best blues ever for a bunch of intellectuals, some one man band playing dark metal in their basement that sounds like fucking animals and killing his family and then some fucked-up looking metal guys/faux girls (not that it is really metal)that i never heard of , yet would have hated in 1986. life sucks, yet can sometimes be so awesome! please don't stop doinfg what you are doing!

Hey, at least the write ups are top notch. Looking at this cover reminds me of Wrathchild. You know...the token glam NWOBHM duders. Of course these dudes just look old and lecherous whereas Wrathchild looked young and silly. And what's up with the fur codpiece? Screw it.... I'm going to dl it and play it at work tonight!

Hearse standouts from the last year-plus:

The blog does a great job with the raw and the unknown. But the mealy-mouthed, freeloading public deserves more than just electrified guitar fury and rote Blue Note sessions. Any favorite acoustic or electronic acts that CH would like to share? The dark/outsider/forgotten history vibe encompasses more than scuzzy NWOBHM, glam rock, and post-Discharge also-rans. Can't help but surmise that the recent jazz/blues fixation isn't a prelude to some deeper digging into the lore of forgotten visionaries.

At the very least, this post made me notice the TURD tag for the first time. Could you please re-up Kilroy Was Here? HAHA

Holy shitaroni. I dont usually leave comments but this post is the best. That picture alone is so monumentally wrong. Combined with "If AIDS was a record it would be Dizzy Bitch's 1986 LP In The Pink" it is the best read I've had in quite a while. The Hearse needs more shit like this and less hardcore watchamacalits.

I am glad to know Dizzy Bitch exist.

it's worth it for the write ups alone. I look forward to this blog everyday.

This deserves the 'turd' tag, but still, I love your blog, but we need less 'turd' and more quality obscureness!

I put on some Los Olvidados, fire up some Sour Diesel and delete everything and start over when not giving a lilly fuck.

I know Vegas blows but don't send all your trash to Sin City! If you interested in the Vegas scene I knew check my blog (shameless plug) http://keeplaughinghahahaha.blogspot.com/

Downloads of demos and stories about the Las Vegas Hardcore Scene from the 80's and 90's which may blow your mind. Do blow.

I'm kind of a lazy fuckwit when it comes to leaving comments, but I CAN say I've recommended yer blog to many.Dude, I've (obviously) never found so much killer jazz AND death metal in one place. You're a really funny motherfucker to boot, so keep up the good work. I must add that I'm always really impressed by your knowledge of the types of music you post and your descriptions are really spot on and fun to read. Enough ass kissing? I hope so...thanks for the killer music, brother.

Embalmer of the Light said...

Are you sure the guy with the cod piece isn't Seth Putnam???? This could be the catalyst that sparked A.C.

Oh, come on. This is totally sweet, if only from an anthropological perspective.

Of course, that picture made me want to take a shower in penicillin.

That photo is like Three's Company meets Tiger Tailz on some fucked up drugs.

I don't think this album's that terrible, as revolting as the vocals can be. Surprisingly heavy. Kind of glad you had the nerve to share this one.

This really wasn't anything like I thought it was going to be. It's better than the "forgotten" early Pantera albums, that is for sure.

It is posts like this that I can say that I am proud to be a follower of this blog, even as a fuckwit.