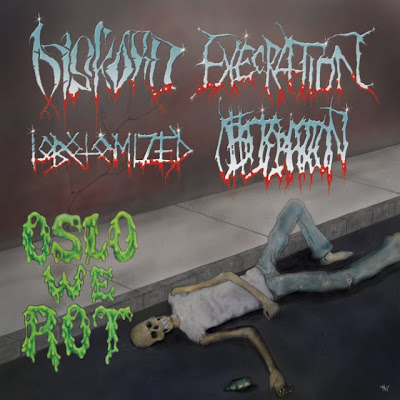 Here is a solid compilation containing four groups of backwards thinking Norwegianocidal maniacs. The title and cover are a rather obvious and adorable tribute to one of the greatest Death Metal records of all time. Execration kick things off with their knuckle drag number "Entheogen." Obliteration are probably the best known of the four due to their stellar album Nekropsalms. Their track, "Envenomed" also happens to be the best on here. Lobotomized are fucking cool trashy, punky primitive Death Metal with two songs about pee pee (one being a Mentor's cover) and one about poo poo. Diskord play angular, mathy Death Metal that kind of reminds me of Black Flag's Process of Weeding Out meets later-era Death, and I am way okay with that (also look out for their fantastic Doomscapes album). Oslo We Rot is about as great as compilations get, I only wish it was longer.
Here
Posted by Aesop at 12:00 AM

Seems cool to me.

Someone only recently turned me on to progressive era Death.
I was missing out, for sure!

Energetic little compilation. Plays better with the Lobotomized tracks deleted. Comparisons to _Individual Thought Patterns_ and _Symbolic_ are flattering - Diskord sound most like Death when playing at about a quarter the speed. Reading them, though, made this download an excellent warm-up for giving those albums another spin. Gene Hoglan and Chuck Schuldiner reinvented extreme metal, and Schuldiner was one of the most poetic and unimpeachable human beings to ever grace the metal scene.

Roger, you are DEFINITELY missing out! ALL of Death's albums are superb, but 'Human' and onwards is just sublime. I miss Chuck.

Ugh, they sold these out quick @ MDF last year, I was able to pick up Obliteration's Necropsalms after they melted my still sleepy face at around 3 on a Saturday afternoon.

nekropsalms is one of my most played records of the last few years. execration really needs to release that new full length. it was supposed to come out at the end of 2010 and still nothing...

love this album. all bands good, some great, and Lobotimized pull off the "awful but awesome" better than any band i've heard in years. BTW they cover two songs, "shit on yr grave" is Autopsy.