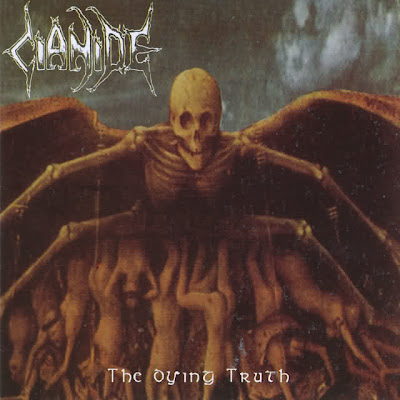 Cianide are another seminal American Death Metal band that don't get their due. The band formed in Chicago in 1988 and can boast over two decades or putrid, lurching tuneage. The Dying Truth was Cianide's first full length album, it was released in 1992, and it is a greasy behemoth of pummeling riffs and grotesque, funereal midwestern guignol. You need this in your life, you stupid fucking asshole.
Here
Posted by Aesop at 1:33 AM

Your right, this is what i need right now along with a good backhanded slap to the face. Mean fucking cover too! I am an asshole, getting used to it now though

I bought this CD in a local pawn shop in 1995. I thank whoever it was that pawned it for crack money because I have it now. I'm glad you have it too so people can hear it. Mandatory listening!

I was sort of a sourpuss back there in the mid ninieties. Cianide and Morgoth were on heavy rotation at the time. Why those two? Dunno.

I had the pleasure of seeing Cianide at this year's Maryland Death Fest. They were absolutely crushing. Great post!

Too bad for Cianide that they've fared so poorly. Many Midwestern death metal bands remained isolated and unconnected to the far more dynamic New York scene. Were early New York bands listening to these guys? Did they influence bands in other regions, or even their own? Making the case for "seminal" would require that the answer to one of these questions is "yes". To other ears they suffer from many of the same problems that afflict second-tier DM bands from this era - vocals/snare mixed way too loud; lack of quality riffs leading to bar after bar of the same boring patterns; a mid-tempo approach that simply exacerbates the frustration of the listener. This is headache music, and not in a good, metal way. Reach for Morpheus Descend's _Chronicles of the Shadowed Ones_ instead. Or, if intent on showing underground Great Lakes pride, broaden horizons with some early Thought Industry.

At around the same time I embraced my assholeness, I started listening to copious amounts of death metal. Discovering forgotten classics like Cianide's The Dying Truth was the tipping point where I truly became a stupid, fucking asshole. Thanks for the reminder!

I wasn't that familiar with them and they were really fucking good at MDF this year. Glad you posted this.

at first glance it looks like skull demon is crowd surfing.

heard of but never listened. will probably DL this when i get home, as i'm curious to hear what a distinctly midwestern take on DM would sound like!

Since I am not a metalhead but an underground /indie/garage rock dork who was listening to Cows instead of Carcass in the 90s I can now say now I that didn't know what I was missing. Enough said.

As for me, I love the torpid mid-pace and the meandering guitar sound- it makes the music sound UGLY, and it that not the whole idea here?

a friend played this for me when i was 14. kinda ruled.

"Greasy Behemoth" -- sounds like my lunch. This is awsm.

killer! thanks fro the recommandation!

>I bought this CD in a local pawn shop in 1995. I thank whoever it was that pawned it for crack money because I have it now.

About 1/4th of my music collection probably comes from pawn shops/used CD stores because people sold their music for drug money. Thanks, war on drugs!

And yeah, this band rules.

In some cases this was good because it = really creative, original, bizarre death metal...for example:

One of the best death metal bands to ever come out of the grimy streets of south side Chicago.