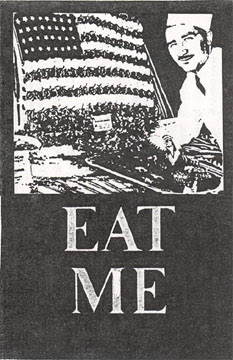 The EAT ME tape was one of scores of compilations released by BCT tapes in the '80s. Kind of a random collection with bands from Southern Califonia, Mexico, the Midwest, and Seattle. The ubiquitous White Flag kick it off with some of their best material (as opposed to that 4 bands monstrosity from last week.) Deranged Diction from Seattle play generic but enjoyable hardcore. I don't know where the hell Corrupted Service were from but they are pretty forgettable so what does it fucking matter? I remember not liking Killroy back in the day but these songs aren't bad, melodic mid-tempo almost 77 style punkers. The Wallflowers suck and contribute two Stooges covers and a jokey funk song, completely useless. Solucion Mortal are one of a few bands from Mexico's hardcore scene of the '80s that I had heard of. Their sloppy, atonal hardcore might be more interesting if it were better recorded but probably not. No Response from Wisconsin sound totally unhinged and cool, doesn't even really matter that this was obviously recorded on a boombox in their garage. So there you have it, the EAT ME tape is pretty much a shit sandwich with standouts White Flag and No Response kind of saving the day.
EAT IT
Posted by Aesop at 1:03 AM

I really love that you post a ridiculous range of music, from shitty to sublime...to sublimely shitty. Regardless of whether it's a good listen or not (and it usually is), it's always a good read. Keep it up.

Deranged Diction is actually from Montana originally and were, for the most part, the only Hardcore Band from MT in the early 80's. Jeff Ament (Pearl Jam, Green River, MLB) and Bruce Fairweather (MLB, Green River, Love Battery) cut their chops in this band. Not saying these gentlemen will be revered by the Hearse, but I grew up with Jeff and lived with Bruce, they were pretty stand up guys in the Seattle/MT scene back then. Living in Redneck America, DD was the crowning Jewel of Montana Punk. When Rod (Seattle Days and never truly recorded or released anything until Jeff and DD spit out a disc of some shite after 25 years) took over vocals and played some guitar, they were pretty epic for awhile. Enough useless information. :P Give me a buzz if you would be interested in their only casette release, plus the unreleased stuff from way back.