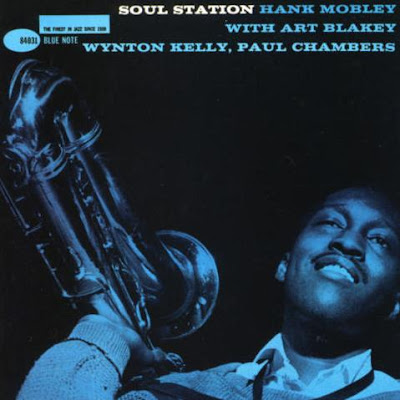 About as typical a hard bop album as you will ever find, Soul Station, is perhaps my favorite Hank Mobley bit for it's sheer purity of intent and it's dedication to the craft of swing and cool. Much of the album's merit can be attributed to the ubiquitous skin-crusher, Art Blakey. Mobley (along with Lee Morgan) is the artist most associated with Blue Note in their most productive period. The tenor sax player recorded twenty-five albums for the label as a leader, and probably another fifty as a sideman. Hank's own records never really strayed far from the formula, no risk taking, the man was a workhorse focused on the task of tone and performance. Soul Station was one of the first Blue Note albums I ever bought, having been struck by its cover in a thrift store bin. Mobley appears a bit baked, in the grip of a sublime sense of accomplishment, a smile creeps across his face as he lifts his horn as if to utter a soft, barely audible "fuck yeah." Mobley didn't need to wildly squonk discordant notes like Coleman or Dolphy, he didn't need to play faster than Johnny Griffin, he didn't need to out cool Coltrane. Motherfucking Mobley knew he was bad ass, Soul Station was just one of many reminders.
Soul
Posted by Aesop at 2:52 AM

Never heard this one. I like hard bop a lot though, and find myself playing it a lot on my trumpet.

OK...it's a fact...I'm 56 years old and I'm gonna die one day and never hear all those Blue Note albums,never mind all the other cool jazz lp's out there...so much mundane shit getting in the way - so little time...

Curious what people get out of jazz these days. How much music now is used as background for menial tasks, or as atmosphere for 'listeners' engaged in non-musical activities. As fodder for rock'n'roll fantasies of non-performers. Etc.

Coltrane played with, but beyond, Dolphy; faster than most. Disagree slightly with the 'cool' assessment (sounds more like Miles Davis). Coltrane was a notorious woodshedder and religious dabbler. His vision of music - as spiritual/purifying - is the only one that makes sense if one is interested in music as an end in itself. Mobley's smiling because he just got paid.

Mobley is awesome; he's the Ramones of jazz.

just got a ridiculous amount of really really nice blue note records in my shop. kinda sucks that yr jazz posts don't get a mile of comments like ze other stuff does...oh well...

fucking LOVE blakey thanks to the post of moanin' (ended up checking out a handful of his other releases), so i'm pretty excited to hear this after seeing that he's involved. thanks!

I come here mainly for the jazz right now, i'm too tired to listen to metal, its 93f

i'm really liking a lot of the jazz you are putting up lately. it's funny because i was into jazz way before i was into punk or metal, and now it's coming back to where i enjoy jazz more than either. it's also given me a new perspective on drumming. i've been on a philly joe jones kick for the past month. thanks so much for your blog. there are so many gems on here.

ps. the warning lp freaks my cat out.