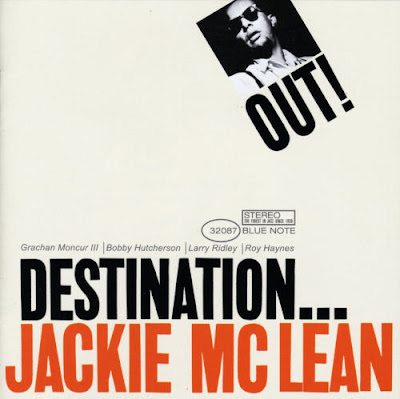 Jackie McLean didn't make a record during his life that didn't absolutely move me. I regard him as one of the most expressive and astute alto sax players to ever live. It was hard to choose which of his many great albums as a leader to feature, but eventually I settled on his 1963 record Destination...Out!. Maybe not the best choice as much of the material here was penned by the amazing Grachan Moncur III, but it is McLean's muscular playing that drives this session, the presence of Roy Haynes, Bobby Hutcherson, Larry Ridley, and Moncur don't hurt either. McLean led twenty four dates as a leader for Blue Note but his output between '62 and '67 remain as some of the most evocative Jazz records of all time. I urge you to look further into those, especially One Step Beyond, New and Old Gospel, Action Action Action, and Let Freedom Ring. Jackie's work ethic, openness to the avant garde, and willingness to take on younger up and coming musicians resulted in a varied and completely fascinating body of work. McLean died in 2006 in Hartford Connecticut, and if that city has any heart or soul at all we will see a statue of him in the center of town before too long.
OUT!
Posted by Aesop at 12:10 AM

I just went out and found this yesterday after reading your NPR Take 5 list. Interesting coincidence. Brilliant record.

Yet another blast from the past. Played this all the time during my late night jazz show in college. Jackie certainly in my top five alto players.

Man, oh man... Loving the jazz mixed with the metal. Another outstanding post. Thanks!

I would have to say Let Freedom Ring would be his best moment. Jackie had a lot of good ones but Freedom still rings brightest. Awesome blog!

I had to walk off some pressure yesterday and put this album on. I learned 2 things from Jackie McLean: a) there is very little in this world worth losing my cool over, and b) I have perhaps under appreciated the xylophone.