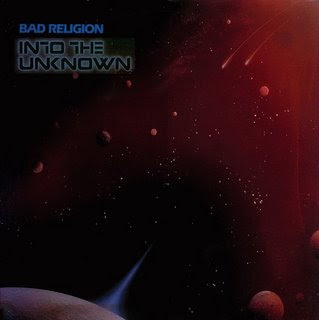 Despite all of punk's liberal leanings, messages of tolerance, and celebration of going against the grain, it still was a rigid scene of unforgiving, unchanging, stubborn, elitist jerkoffs. The rule was that since punk was anathema to all that was corporate and false, any punk band that stopped playing what was perceived as punk had obviously "sold out." Immediately the band's motives were on trial, and the verdict was always that they did it to make money, but sadly it never really panned out that way. The audiences were ruthless. Remember Discharge's ill-fated tour in support of Grave New World? And who can forget Decry's descent into Sunset Strip coke-metal hell, or Die Kreuzen's flirtation with twee '90s alterno-shit, or the most notorious, SSD's abomination, Break It Up?
In 1983 Bad Religion released their second album Into The Unknown, following so shortly after the debut, How Could Hell Be Any Worse?, a so-so album of Southern California punk. Into The Unknown was very confusing, and upsetting to many people. It's really hard to pinpoint exactly what the band were thinking, who they were influenced by, or what they were going for with this one. Kind of like Arena Rock, new wave, and prog rock, yet so lacking any real lavish production values to suggest this was an attempt at a cash in. I don't buy the "sellout" theory in regards to this record. It seems sincere enough, besides it isn't an obvious appropriation of some already tried and true successful band or sound.
Some have suggested heavy drug use was behind the band's new sound. Granted, Into the Unknown IS weird, it just doesn't strike me as drug weird. The production is horrible, muddy and slathered in totally goofy keyboards. Most of the songs are built around Kansas-styled acoustic guitars. All the while, the distinct voice of Greg Gaffin shines through. Bad Religion wishes Into The Unknown never happened, although they have stated many times that they are not trying to hide it. It's the only album from their catalog that never was reissued. On their retrospective cd collection Bad Religion 80-85, (available here) material from Into The Unknown is completely left out. Rumor has it that 10,000 copies of Into the Unknown were pressed on vinyl and almost all were returned to the label. I've seen it fetch over $1000 on eBay.
Bad Religion are clearly smart guys, they use big words like surrpetitiousness and isomorphic, so why the foolish pride? Why not own up to making a really fucked up album when they were young and on drugs? And most importantly, why not reissue what (in my opinion) is their single greatest recording? Obviously at some point they thought it was good, or they wouldn't have made 10,000 of them, right? We all have things in our past that we may not be proud of, be it an ex, a job, a band, that night where you drank too much bottom shelf tequila at your office Christmas party and shit yourself shortly after making a clumsy pass at a coworker, but eventually you learn to move on and eventually even laugh about it. I guess to Bad Religion, Into The Unknown is like a polaroid from that poopstained, tequila soaked office party, a polaroid that pops up every so often, and here it is on the internet. Just rerelease it already, Epitaph, I'll buy two.
Here
Posted by Aesop at 12:20 AM

Thanks for posting this. I've always regretted selling my copy on eBay (I did NOT get $1000 for it) because I always, truly, liked it. And I liked Die Kreuzen's last few as well so pffft. But I'll give you Break It Up. If shit stinking on the sidewalk made sounds, I think it would sound an awful lot like Springa's voice.

oh schnappss!!!!
i KNEW if there was one blog that would blow up the spot with this album it would be you.

It's settled then, SSD's "Break It Up' gets posted on Cosimic Hearse in the near future.

isomorphic? As in biology? Daaaaaaaaaaamn that is punk. I am naming my next fanzine Isomorphinic.

Wow. Thanks for giving this album the props it deserves. It sort of reminds me of the Better Beatles. I had an old tape where Jawbreaker covered "Chasing the Wild Goose" live at Gilman.

I always hated Bad Religion, but this record is "titty", bro.
I am also a big fan of "Break It Up"...

For the record, Decry's sleaze mini-album is actually not that bad as people think, but more importantly Grave New World is a goddamn masterpiece.

I can't find a decent vinyl rip of Grave New World anywhere, is the album mixed real low or something?

I don't expect much agreement, but i think "Break it Up" is the best SSD record, I like Die Kreuzen's entire body of work, even think the TSOL record with the white cover and keyboards is pretty good.

But only "Break It Up" is both great rocking and hilariously stoopid. Low-Res, I'm with you.

I am a devout Bad Religion fan and I accept this album in all it's goofy glory.

Just when you think you totally effin despise a band, someone goes and posts something like this and the whole deal just goes tits up. Me and my tits thank you, though I'm not getting any of their other albums, I swears!

Have to admit to enjoying pretty much everything these guys did up until No Substance (even then, I can find something to like about those later albums) but I never tracked this down until now.

Into The Unknown is like Return of the Jedi - both are entertaining, and although nothing like what came before, what would transpire in the late 90s makes Bad Religion's keyboards and a bunch of Ewoks look like high art. By this line of reasoning, 'I Love My Computer' = Jar Jar Binks.