Among Ruins And Dark Battlefields 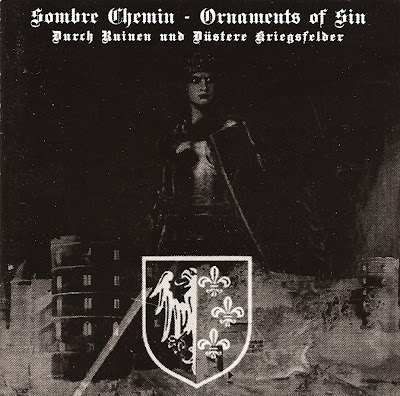 Durch Ruinen und Dustere Kriegsfelder is the title of the split CD of two of France's most hardline NSBM bands, Sombre Chemin and Ornaments of Sin. I picked this up for Sombre Chemin. Their fuzzy, melodic dirges remind me of Akitsa's more reflective work. Sombre Chemin are avid Third Reich fetishists, but they seem to be coming from a rather despondent place, as if they are saddened by the fact that the Thousand Year Empire barely lasted a dozen. While Sombre Chemin lament what could have been, Ornaments of Sin just seem bent on being mean. Ornaments of Sin are attracted to the more brutal and sadistic nature of fascism, and this is reflected in their songs. They are more rocking in their approach, even a bit punk in a way. While I appreciate Ornaments' gut-level malevolence, Sombre Chemin wins for being far more elegant in their themes, and far more sonically bizarre. You might feel otherwise. You might also be sensitive to this kind of glorification of fascist ideals, but I don't really give a fuck.
Voici
Posted by Aesop at 1:15 AM

Thank you for posting this. I love Ornaments of Sin and have been quite interested in Sombre Chemin.

Tre cool, I hear what you mean by " sonically bizarre". there are some great aural landscapes here. Thanks Aesop>Rg

Thanks for throwing this up. Love both of the bands!!

the correct translation of the title would be: through ruins and gloomy battlefields

Ach! I always botch the translations.

God damn I love the Artwork on that Cover. Makes me want to dress up just like him and fight him, just so I can see how bad ass I would look if I were fighting someone else!

Fuck this NSBM crap. This really is the lamest stuff in existance. It's played by lonely boys who live with their parents and jerk off to pictures of Hitler.

This is the absolute best blog on the entire interweb. You are a king among... douchebags.

Hey man, could you re-post this? i got really excited when I saw it, but when I clicked it said the file is expired or something... :( thanks, love this blog.