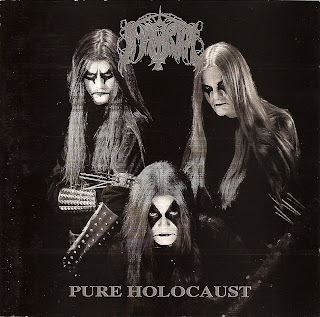 Immortal's 1993 album Pure Holocaust. Perhaps the most perfect example of true Norwegian Black Metal there ever was. This is the album I would give to someone who knew nothing about Black Metal but wanted to know more. You have it all here...corpse paint, a bitchin' illegible logo, icy melodies over blizzard-like riffs, lyrics about really cold places, and a mysterious Grieghallen studio production. Really what more could you ask for? And who could resist that cover? It's like a fucking Black Metal Kabuki prom photo, their perfectly coifed manes cascading like waterfalls upon their most formal gauntletry. This is Black Metal in its purest form, yet there are still Pure Holocaust revisionists that say this album never happened, or that it isn't as great as people say. If you already have this, may I suggest you spend some time with it today? If you don't have it, well, what the fuck?

I didn't have this man,but i like their first one and even like Sons of Northern Darkness.I like "I" alot too.what do you think of them? Hope it is in Mp3,I hope,I hope. Did that Ambush link work?
Troy

Great album, though At the Heart of Winter is still my all time favorite from this band.

Awesome album! For those who aren't familiar with these guys I would suggest "Battles in the North" as well. A mighty fine piece of Black mayhem if you ask me.

Indeed. I love all their albums. This one happens to be the clearest example of the Black Metal sound and visual aesthetic I have found. It also has "As The Eternity Opens" which is one of the greatest BM songs ever. Musically I prefer "Blizzard Beasts" for it's fucked up production and totally weird angular Morbid Angel riffing.

amazing ,though "blizzard beasts" is my own favourite too.thank you.

Ah a classic slab of frozen tundra black metal! Not a bad album in their discography, some just more destructive and masterful then others. Seeing these guys live was one of the greatest moments of my life! For live black metal bands only Emperor topped em and really with songs like Thus Spake the Nightspirit at their disposal to play I'd expect nothing less.

They were among the 5 best live bands I saw. Emperor was a bit of disappointment, maybe an off night. The best live BM band I have seen will always remain Impaled Nazarene, just relentless.

I saw Emperor twice, the first time without Samoth and the second time with. The second guitar made a big difference for a band with a sound as intricate as theirs. They were noticeably more energetic and obviously much fuller sounding.

I saw them with Samoth, around '98. Witchery played too, anything would seem good after Witchery but Emperor just didn't bring it.

great record. not much else to say, really...

classic, but my favorite is still 'diabolic full moon mysticism'

sends blizzards through my veins.

Relentless fucking drumming, some unexpected time signature changes here and there, and totally evil. I like it.

hey aesop..did you see emperor at the maritime hall in sf? i was at that show,and what was lame was that the house lights were on the whole time emperor played,which is what killed it for me. that and the jazz bass player with his bass all the way up to his neck and 15 strings on it..not very bm.

I think this link is broken... zdnet just keeps looping from "your download will start in 20 sec" to "click here to download" ad infinitum. I'll try a different browser

Just cold and vicious. I love how the atonality of the guitars creates this black whirlpool. Thanks for posting these, I need to get their other albums now.