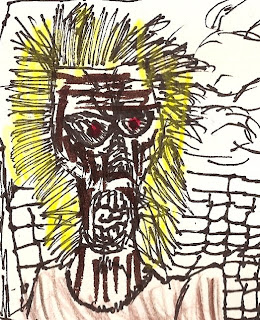 Fatherhood has many joys. Seeing your child's first step, their first words, their first day at school. All of these milestones fill you with immense joy and pride. Recently my own little seven-year-old wrathchild, Ezra, discovered the sheer rocking rulocity of Iron Maiden, and he is hooked. And watching his tiny, unjaded ears hear the Maiden classics has reminded me of what excited me upon hearing them for the first time around 1982. All fathers have traditions they will pass on to their sons, some not so cool, but a love for one of the greatest heavy metal bands of all time is as valid and important as fishing, riding a bicycle, or sports, at least at my house it is. So I welcome and foster this obsession of Ezra's, giving him all my Maiden CDs and watching the Live After Death DVD with him as if it was Finding Nemo. Ezra has been bugging me to pay tribute to his favorite band here on the Hearse. So here is Iron Maiden's earliest recording known as The Soundhouse Tapes. You get primitive versions of "Iron Maiden," "Invasion," and "Prowler" (Ezra's favorite Maiden track.) Four songs were recorded, but there was not enough money to finish "Strange World." Weird to think that now they have their own jet (another detail that Ezra finds beyond cool.) So this is for you, little man, and for the band that brings both of us so much joy.
Up The Irons!
Posted by Aesop at 12:00 AM

Thank you, this rules

I always thought of having a Daughter and listening to the stuff I do.

Thanks for this one man, also would it be totally fine for me to ask an Upload of Suffer's Global Warming EP? totally cool Old School Death.


Thanks man and Great job on the Blog.

Thanks. I don't know of Suffer, but I'll certainly look for it.

awwwwwwwwwwwwww!This is wonderful! I love his little artistic rendition of Eddie.

Yes! Prowler! Kickass song. The part where it picks up and goes off into the soloing etc is classic. The s/t is probably the best metal album ever.

...what about Running Free? Surely he has to love that?

oh yeah, I can do the Suffer EP if desired

Too cool! I want my kids to listen to some "old school" along with whatever is current, and I'm worried that if I push it they might turn towards awful mainstream. Your sucess in your artistic educational endeavors is to be highly commended!

Yeah, don't push. Ezra was obsessed with the 80s, so I made a comp of various genre 80s stuff, everything from Bad Brains to Tears For Fears to Maiden to Gary Numan. "The Trooper" really spoke to him. But, really, how could it not?

That's pretty solid that you're getting your boy into good music, and he's not learning it through Guitar Hero. Kudos to you =)

Aw! Ezra kinda frickin' rules. I wish Tess would open her ears/mind up to something other than insipid indie rock and kids' music, but she's just not into anything interesting yet and I won't push either. I just really can't wait for the day when she stops complaining about everything I put on and when I don't have to wear headphones listening to whatever *I* want to listen to.

Wow, cool kid-- almost makes me wanna procreate, if only for about a tenth of a second. Anyway dude, I I woke up.

So awesome. My son is almost 2 years old now, and he loves music. It is awesome to watch him pick up "Reign in Blood", hold it up and ask me to "Play 'Rain' on the radio". Of course, he also likes Krokus, which is just weird, but I guess it's my fault for having a copy of Headhunter in the house.

So awesome! I was fortunate enough to have an awesome older sister who introduced me to Maiden and Black Sabbath when I was around Ezra's age. I'd go to her house, play Atari, and headbang until my neck was weak. I remember trying to explain how cool 'Number of the Beast' was to my little friends at school to no avail. Thank you so much for your blog!

On an unrelated note, do you have any Cathy Ames? I don't know what their entire output was. I've got a split 7" they did with Godstomper, and that's it. Couldn't find anything about 'em on the web. Thanks again.

Cathy Ames? Another one I never heard of.

My gateway drug was Twisted Sister, I'm ashamed to admit. But Iron Maiden was definitely second.

My old man was pretty cool, he had some Sabbath on reel-to-reel and that's what's up.

i still remember the first time i heard iron maiden from an older cousin.it was the mid 80s,i was 8 or 9 years old and the intro to "number of the beast"sounded like the most evil thing in the world to my innocent ears.i hope i can pass the torch to my newly born child in a few years.

# of the beast was a big hit during our 6th grade lunch... we'd listen on my shitty cass player & draw eddie's on our book covers the rest of the day...

pretty much every local metal band had a maiden cover for the battle of the bands gigs...

a bunch of my students dig maiden through i guess guitar hero. pretty funny to hear a class of 4th graders chanting out, "6!" "66!" good times...

Thanks for that, Eury.

My school was devoid of metalheads, or at least any that were there were several grades above me and so our paths never crossed while I attended.

Curiously it was the 1995 movie Mortal Kombat that got me into metal. I loved the movie and being 13 years old at the time I loved the theme song to the movie and promptly obtained the soundtrack after seeing it. It was mostly techno and your expected 90s blend of guitar powered industrial-esque bands but it also had songs from Napalm Death and Fear Factory on it. One listen to ND was all it took to corrupt me for life.

Aesop I love to hear that you are bringing your son up to Iron Maiden! I don't have any kids yet myself but not long ago I took my best friend and her son to see Maiden on their most recent tour. I'm not sure the little guy knew what to make of it all but he definitely had a great time from how much he's talked about it since!

Benito is all about At the Gates right now...

When he was like a eyar old and wouldn't nap, we'd drive around and it was either The Clash or Minutemen that soothed him. Then, around three he really like that old Philly band, Ruin.

Oh, and he digs all that Dax Riggs solo stuff lately too.

Must be something about reformed fuck-up SF dads like us, huh?

LRV, that rules. I think At The Gates is too "crazy" for Ezra. He's been digging some Mercyful Fate too.

Ezra just announced to me that he wants to be Eddie for Halloween.

This is a great blog

man...Don't make me want to have kids. Seriously!

Adorable story. I'm 19 now and I'll never forget the day that my dad took me up to his parents house in Pictou (Nova Scotia, Canada). He took me down into the basement (his old bedroom, nothing had been moved since he left the house).

He took out a big chest from under the bed and opened it. The very first thing he passed me was a copy of "Unleashed in The East" on vinyl.

As an 8 year old I must have looked at that cover for hours and hours. I was hooked without even hearing it.

I might not wany kids. But my total respect goes out to you. (Then again, I often wonder if I'll just end up being a boring dad with a mini-van, 3 kids and a house in the suburb who never tells his kick ass stories)

Oh Bummer, the link is down. Any way you can re-up it? I'd love to hear it. Ps. How can I email you? I have something I want to ask you about, regarding your old band Ludicra, and my Cousin. who turned me onto the band. Apparently, he may have played some shows with your band, as an opening act or whatever. Contact me at, subhuman@ainet.com

Thanks, Love the site.

You can write me at: