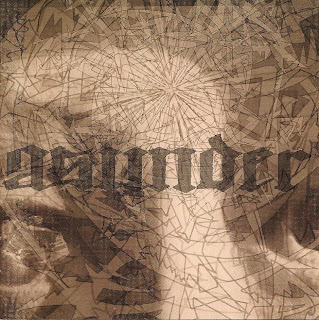 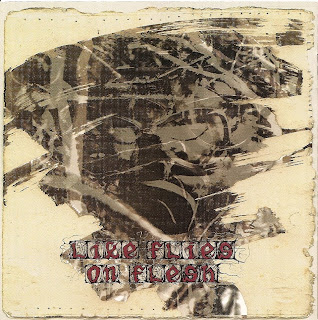 Here's the Asunder/Like Flies On Flesh split CD released by Life Is Abuse in 1999. This is Asunder before the addition of former Weakling guitarist/vocalist John Gossard. This early incarnation of Asunder contributed three tracks to this album. The first, "The Fall Of Elders" is a more Bolt Thrower-like track, while "Tides Of Ruin" hints at the colossal doom the band would later become revered for. The band closes with a somber piano outro composed and performed by their drummer/vocalist Dino Sommese (formerly of Dystopia.)
Like Flies on Flesh were a fantastic, somewhat hard to define band from Ft. Worth, Texas. Fronted by bassist/vocalist Jamie Myers who went on to play with Hammers of Misfortune. Like Flies On Flesh played a sort of hybrid of melodic Swedish Black/Death and crust. This was released on vinyl as well. Another jewel in the Life Is Abuse tiara of exceptional releases.
Here
Posted by Aesop at 12:05 AM

I love both these bands. Do you know if Like flies on flesh released anything else?

Not that I know of, they weren't around very long.

I have a Like Flies on Flesh demo .If you throw up your address or email me at cagelearner@hotmail.com,i'll gladly work something out with you.

Another great post and great warm up for those don't know Asunder. Hopefully you're planning on laying into the Profound Lore catalogue. Great posts thanks!

i heard 'a clarion call' before this so i was pretty blown away at how different it was.

and yes 'lifeisabuse' pretty much can do no wrong

Never heard of Like Flies On Flesh, but I'm wishing that they had stuck around long enough to grace us with a full-length.
And speaking of Hammers Of Misfortune, got any hard-to-find stuff?

Asa, I am sitting on some Hammer's stuff but I don't think the band wants it shared.

Love this LP!!!L.F.O.F. are great,I still see some of the ex members when Im in Texas.Nice to have this in digital form.Mike

the asunder tracks on this have been in heavy rotation for me since it came out so many years ago... I think I bought it at the CW... a total favorite.

Asunder are one of the greatest doom bands right now.both their records are great as well as their split with Graves At Sea(another great doom band who will surely be missed,by me at least).Life is Abuse is one of the best underground labels.they have been home to so many great bands(Dystopia,Asunder,Tarantula Hawk,Yeti,and many,many more).

Asunder is one of my favorites and I'm eager to check out Like Flies on Flesh. Thanks for the post.

Looking forward to giving this a whirl. Thanks again!

I've had to buy this thing 3 times from loaning it out and never getting it back.

:( the file wasn't found....
if there's another site you know of can you please forward it to me??? paguvel@hotmail.com

ahhh! As the gent above this post said, the file could not be found?? Any chance you could repost it?? Thanks!!!