There Is No Authority But Yourself 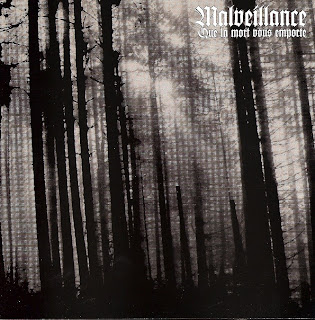 Do yourself a favor, if you should ever come across anything released by the defunct Canadien Black Metal label Autistiartili Records, pick it up. Before calling it a night, the label released some of the best CDs and tapes of raw, lo-fi, hateful Black Metal from the likes of Branikald, Akitsa, Sturm, Verivala, The Shadow Order, Draugurz, Evil, Volkurah, Sputum Lunae, Kristallnacht, and Stella Polaris.
The label was founded by F. the sole member of the band Malveillance. Que La Morte Vous Emporte (Autist 008) Malveillance's second offering was released on CD in 2003 in a limited run of 500. It is a harsh, buzzing, assault of mid-tempo, punkish Black Metal. Imagine a nastier Akitsa (if that is even possible). The very sparse layout of the insert reveals little more than the quote: "THERE IS NO AUTHORITY BUT YOURSELF. MALVEILLANCE-RAW ANTI-ZIONIST BLACK METAL." Later on F. would shed NS trappings in favor of a more crust punk aesthetic and sound, as well as a weird obsession with playing Ramones covers. Strangeness.

65 downloads and no comments..hmmmm, the NS thing, it itches doesnt it?
listening to it for some reason i thought that guy was a junky.pretty fucked up stuff though...

Well, Billias there are alot of leeches out there. There is alot of liberal guilt that might prevent some from commenting.

I like the tempo (though the drums on, say, "Modernisme" really seem to lag behind the guitar) and simple chord changes, but admit that the extra low-fi quality doesn't really make me want to keep it in a regular playlist. It is interesting that the depth on "Defiance" is much different.

Sometimes I feel dumb when I comment, since I don't have the ear or background of you guys. But I've been trying to make a note on every download recently, and think it stinks that there could be 65 downloads without a comment!

Great album, I couldn't agree with you more about Autistiartili records. Everything they released was quality.

Paris, no worries. Sometimes just a :this is cool" or "thanks" or "Fuck you" will suffice.

Thanks for the encouragement, Aesop! Happy to oblige.

I've downloaded lots of things from your blog and I've been checking it pretty regularly for months now. I just don't feel the need to make comments to tell you your blog rules everytime I download something I didn't know that I like or to make requests. But I do appreciate all the work you're putting into this blog and your efforts to share very obscure stuff in all genres. I just wish we had the same tastes when it comes to black metal, haha.

this is great hate music... i listen to this at work while i paint fences for rich fucks. glad you posted more of their stuff. your blog is my favorite for black metal EVER...

Any way you could re-up to mediafire or something? Z-share is now made of crap and twigs. Anways, great blog. thanks!

greetings !
i stumbled upon the blog by searching for Varghkoghargasmal's fucking awesome 'Call Of The Raven'... and was quite please to notice that some of the music i really did like and learned a things or two!!!!
Also, it is entirely true that F. Malveillance shed the fascist skin after that one first cd and thank bloody goodness for that...although
there is unfortunately still a 'stigma' related to that part of his musical group.
For those interested in Malveillance; afterwards, there
was a cd reissue of the 'Insignifiance' cassette (along w/ bonus tracks); a full-length called 'Just Fuck Off' and a compilation of cassettes (released by Harsh Brutal Cold) w/ lots of Ramones and Queers covers called 'L'Appel Du Neant/Le Froid Du Nord'. I had the pleasure to work with two other labels and F. to release it and it was quite a satisfying experience to say the least!! Both cd's are still available as well.. contact me for these and a distro list with cheap prices. Sorry for the lousy ad thing..

NSI, greetings. Yes, I have all those great Malveillance releases. Nice work. 'Call Of The Raven' will appear here eventually. I used to do a cassette only label and did a limited run of those tapes. Amazing band. Also Varghokarghasmal has a full length CD out now on tUMULt records called 'Drowned In Lakes' GET IT!!!

Thanks for the kind words !
i simply cant wait for 'Call Of The Raven' to appear on your blog, i absolutely crave the 'Drowned In Lakes' cd on tUMULt to the point of a mandatory listen of it all once per day....i love it so much im putting a cassette version of it on the label.

"I used to do a cassette only label and did a limited run of those tapes."
So you are behind Funeral Agency ?!?!? Bloody great label but the cassettes are nowhere to be found sadly..wish i could get my hands on them ! If you have some of these cassettes, i could propose a personal trade if you feel comfortable with it.

Unfortunately all the Funeral Agency releases are long gone. The first Lascowiec tape, the Angkor Vat tape, and the Geistus tape are all available for dl on this site. The other releases (Augen, Blutvergiftung, Varghakhargasmal, Bosse De Nage, and Gravehill) will eventually be too. In the meantime Dark Hidden Productions. has put out a great CD of both Lascowiec demos I released. And I am sitting on some great unreleased Lascowiec stuff that I might post if it is okay with the band members.

There is no authority but yourself...isn't that a Crass quote? I'm sure they took it from some activist.Blah,blah,blah. Haven't downloaded this yet. Bored scrolling through,reading your write ups.

Ya this is heavy,the guitar sounds like a swarm of locusts and the vocals sound like he's gargling blood. I didn't realize how much fascist shit was out there. What does NSBM stand for? Nazi Skinhead Black Metal/Nazi Shite Black Metal/Nu School BM...seriously though, what does it stand for?

National Socialist Black Metal is the catch all phrase to describe Black Metal bands with a right wing and/or racist agenda.

Thanks for uploading this!

Does anyone know if the interview with ”F.” from the HARSH BRUTAL COLD zine # 1 is available anywhere online?

I'm also interested to know what was to be found on http://www.malveillance.cjb.net/ while it was still running.

It would be interesting to know more about this guy

Aesop,
this whoole piece from yr write up to the comments fucking rule was one of the more interesting reads on black metal/malveillance i have seen thus far ever. this blog fucking rules and we thank you..cheers.