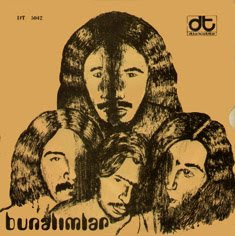 Here's some gritty, caveman psychedelia from Bunalim (sometimes called Bunalimlar or Grup Bunalim). The band was at the forefront of the fertile Turkish scene alongside bands like Mogollar and Erkin Koray. I don't really know much about the deep world of Anatolian Psych, but this record from 1970 (Bunalim's only release) speaks to me, and I love what it says. This shit is hairy as the cover suggests.
Here
Posted by Aesop at 12:02 AM

Hey great blog you have here, I don't download much, but if I do its normally from here. I'm giving this a listen now and think its amazing, you don't happen to have a track list though?

I can't say with certainty I've ever heard anything from Turkey yet,but as I am one seriously hairy guinea so of a bitch,I will check this out

Where are the 1st four tracks? Thanks Aesop!

I love Turkish Psych...thanks as usual, I probably get about 1/3 to 1/2 of what you post...excellent stuff...hey, though, unzipping this gives me tracks labeled 5-12. Are there 4 more that didn't make it?

The tracks are labelled such because it was pulled from a cdr a friend sent me and there was something else before it. This is the album in it's entirety. Unfortunately I have no track names.

Cool band. Not sure if it's the same track list, but I downloaded one of their albums from Kick To Kill a while back:

The CD that K2K posted is a retrospective. I believe it contains this album and some extra stuff.

How bout some Philipino pysche?

I just don't know anything about it. Any recommendations?

Of all the kick ass things you post, I'm always drawn towards the psych. Another great post. Cheers!

Great post. Love the Turkish psych. This one caught me off guard. Just found your blog a couple of weeks ago. Good variety. Very consistent. Consider me subscribed.

I'd also recommend Üç Hürel, 3 brothers playing Anatolian psych on self-made instruments.
And Selda Bagçan, a psych protest folk singer. In the seventies her records were forbidden in Turkey and she was also prohibited to travel abroad - thus unable to tour and perform live.

Alright dino, thanks for the recommendations.

Hey, thanks for this album. This kind of stuff isn't my usual cup of tea, but this proved to be pretty cool.
For what it's worth, the track listing seems to be (based on song samples found online):

Okay, so I couldn't figure out what "Track 11" actually is.
By the way, "Yeter Artik Kadin" is a cover of an Iron Butterfly song called "Get Out Of My Life, Woman."

I discovered your blog just recently, and it's terrific. I know a fair bit of work goes into running something like this, and I hope you know your efforts are appreciated.

Cigouave, thanks for the tracklist and the kind words.

I really enjoyed this spin. I am completely unfamliar with the Turkish psych movement. I'll be digging for it in the future....

Thanks so much, Aesop! This is a great album and I've been playing it all day.

I found on this site they have the whole album and track names:
http://krishnasgoldendopeshop.blogspot.com/2007/08/bunalimlar-bunalimar-1970-224kbps.html

Ayet Aydin, the singer guitarist, now apparently lives in California and plays with this band:

I haven't heard any of their stuff, though...

To set the record straight, Bunalim never had an LP out. They released three 7" singles, which were first comped on a bootleg CD-R along with material by another band, and then gathered on an LP/CD release by Shadoks.

The cover pic here is from one of their singles.

And agreed, this stuff is totally rad!

oh my LORD i want this album so badly! is there anyone that still has it (if not op?) and would be willing to upload & share the love? :D