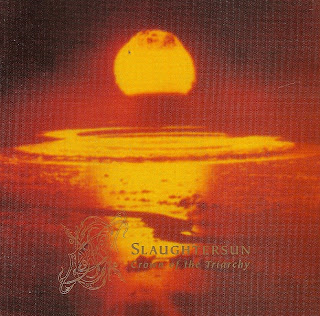 Man, what the fuck happened to these guys? Dawn from Sweden were heralded as the heirs to Dissection's Black/Death Metal throne when they released Slaughtersun: Crown of the Triarchy in 1998, then they just disappeared. While I wouldn't exactly hold these guys in the same regard as Dissection, the praise showered upon this band was not entirely undeserved. Slaughtersun is a brilliant record from beginning to end. Perhaps the problem was that it was released by a label run into the ground by a little, heavily-cologned man who often spoke of himself in the third person and with a fake British accent. Like all of that particular label's releases this is probably a bit hard to come by. So if you have an affinity for Swedish metal ala Dissection, and you missed this the first time you'd do wise to get it now.
Here
Posted by Aesop at 12:00 AM

Demon of the Fall said...

This is indeed a brilliant record, and was actually re-released by Necropolis/Century Media back in '04.

there's a good chance that these guys are still waiting for their money, too. It always happens to the wrong bands

This is great, plenty of triumphant riffs going around. Curious what is on Disc 2? This pops up as "disc 1"

Somehow, I have never heard this. It's fucking awesome. Thanks, doll. I am stoked.

One of my favorite metal albums. I've used "To Achieve the Ancestral Powers" as the opener of a few comp tapes for friends.

they have a web site at with a bunch of downloads of other songs:
http://www.dawnband.com

Not aware of a disc 2 but that might have to do with that Cnetury Media reissue.

Mine is the Necrapolis version.

Demon of the Fall said...

The second disc has the "Nær Solen Gar Nider For Evogher" album and the "Sorgh på Svarte Vingar Fløgh" ep. The first disc also has 4 tracks from a split cd.

great album, a favorite of mine for many years now!

"Nær Solen Gar Nider For Evogher" album and the "Sorgh på Svarte Vingar Fløgh" are both great as well, not as great as this one but still worthy of mention.

disc 2 has the rest of the band's discography, minus the demo tapes.

Many thanks as always. This is damn good. Thanks for emptying my wallet again on some great music.

How about some old school skate board music like Faction?

Being from the land of Gator. I am sure you have some skate punk that you need to drop the knowledge on us.

Def. Epic, Well thought out and well written Black Metal. This album shines against some of the lo-fi laziness of other BM bands. And it was written ten years ago!

They were apparently working on a new album a couple years ago, called The Threefold Furnace or something equally ridiculous, but I guess it was never finished.

ther older shit is great too

I completely forgot about this band. Thanks for the reminder, I dug this out and rocked it this morning.

Why's nobody done the "Tie a Yellow Ribbon" joke yet?

Nope, I wasn't referring to Matt Harvey. He had nothing to do with this album other than working briefly at the label.

Great album.. You should try to listen Decameron "my shadow.." album too, released on No Fashion if I remember well. Another killer death/black band coming from Sweden, one of the best album released in these style, but no one seems to remember how they were amazing..

oh, about Dawn, another thing to know:
"The (new) album will be recorded and mixed at the end of the summer 2008!"

I remembered loving this post and stumbled upon a link I think you will dig. Enjoy!