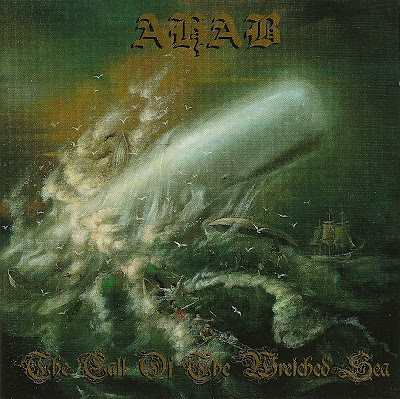 What could be more perfect than doom metal and whales? German band Ahab have modeled their sound and concept around Herman Melville's classic novel, Moby Dick, and seeing how it is one of my favorite books, I was drawn to The Call of The Wretched Sea. Taking a cue or two from Thergothon and Worship, Ahab's sound is as colossal and lumbering as the white whale itself. Of course it would be impossible to cover all the nuances and various themes covered in Herman Melville's original tome, but like Melville, Ahab do a fine job in capturing the absolute peril and vastness of the ocean. Doom metal and whales.
Here
Posted by Aesop at 12:01 AM

I definitely agree with you. Moby Dick = one of the best novels. Call = one of the finest doom albums. Nothing could be more epicly dark and mysterious than the theme of the White Whale and Ahab's suicidal quest to destroy his God.

It truly is all about Moby Dick...and whales in general. The book reads like a good doom record plays. Bands need to read more books. Perhaps the current state of music wouldn't be so dire if they did.

its slow, crushing and makes you feel uneasy!
which translates as perfect :)

thanks for this Aesop. this rules! cosmic hearse is one of my favorite daily haunts and I appreciate the time and effort you put into it. kisses

You know I love me some Danny B.

great stuff! I've been slacking off on keeping up to date on goings on with doom metal for the last few months but I do love some top-shelf doom metal when I hear it.

i was at a show at annies and somebody had a box of cd they were selling, think it might have been "DJ Rob Metal" but he wasnt at the table, anyways i actualy had this in my hand, but i picked up "Oakhelm" 'Betwix and Between instead, wich is a fucking awesom disc, so thank u for posting this.

This one from Ahab and the self-titled 'Wijlen Wij' (Belgium - check 'em out on Aesthetic Death) were my most crushing doom experiences of the last few years...

Dino, what about Asunder?

thanks for the share... i'd seen pics of this disc around the interwebs & was intrigued.

too bad orson welles is gone. i can hear him doing some voice over narrations ala his man-o-war stuff...

amazing record.and it reminds me that at last i have to read Moby Dick.

Not having a dick and all, I have never really seen the momumentalness of Moby Dick, but this is REALLY fucking good. I've listened to it about 5 times now and its' just gotten better.

dino's right about that Wijlen Wij business, too. I'd like to listen to that right now, but it is trapped on my other hardrive. Wah.

@ Aesop: Yeah, Asunder is great too of course! And what do you think of the new Moss?

@ Brandi: Wijlen Wij's guitar sound is so awesome... When I complimented them about it and also sent them a review from aQuarius, they were pleased that there seemed to be some people at least who liked their guitar sound...

This album's a favorite of mine--thumbs up, man.

Thank you for posting this. Believe it or not, I had just heard this album for the first time the day before you posted it. The universe clearly wanted me to taste the salty tang of the sea with the sound of doom in my ears.

This is a must own. Amazing and absolutely crushing.

this album kills. thanks cuzzin.
-eli

Right on, Cuz. Nice to see you here.

Well, I have to get this too. It looks fantastic. Moby Dick is one of those books that I have read alot about but never really thought of reading, maybe I should pick it up.

Btw Aesop, are you still interested in Jamra? I got the record now, and it's quite... special. It's at my girlfriends place though and I have to get my thumb out of my ass and bring it to my own apartment to be able to rip it. Then I need some guidance when it comes to technicalities, hope you can assist me there somehow. Haven't transferred any vinyl to computer yet...

I think this link needs to be repaired, I can't download it and it looks pretty awesome!

Oh my fucking god. I know I'm behind the curve on this one, but I just downloaded this and was bloody amazed.

This record is aquatic, oppressive and brutal. The rhythmic flood crashes on the detritus-ridden shores of my wasted brainmeat.

A mote of wistfulness is even audible under this funereal sonic tsunami. Or is that the sweet sound of too many Sierra Nevadas?

damn. this shit rules hard. listening to a keyboard part right now that sounds like john carpenter is playing on this shit.

bud light and dank makes this shit even more special.

Have you heard there new album yet? It blows this one out of the water. Pun intended.

this is fantastic, a much needed fixation after hearing christmas music all the time for the past two weeks.
thanks for sharing!!
will have to check out their new album.

I don't know how I missed this one! This is hands down the best doom record I've heard since discovering Grief and My Dying Bride. Goes great with this shitty New England winter. Beautiful. Thanks.

Listening to Warning right now...figured I'd give this a go. Thanks.