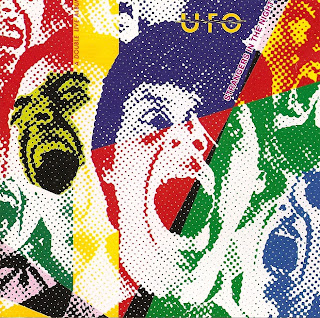 "UFO JAMS" Those two words seem to be graffittied all over my hometown of Hollywood, Florida. Behind the 7-11, on the pier where the Haitian men would fish, and under the bridges where the older kids smoked their brown weed. UFO JAMS? What does it mean? my young mind wondered. If UFO was a band, I certainly wasn't aware of them, or the magnitude to which they jammed.
When I was about sixteen I was at a party at Bruce's house. We were doing gravity bong hits and I had a seizure and banged my head on the table. When I came to I had an icepack on my head, and I heard this song playing, and it sounded so fucking good. It was "Mother Mary" from UFO's 1979 live album Strangers In The Night. I asked Bruce who it was, and like a wizard answering a thousand year old riddle he said, "UFO, they jam."
Some twenty-two years later, Strangers In The Night is the only UFO album I own. Their studio albums are good but usually suffer from a couple of straight-up lame tracks. With Strangers you get all their best songs played extra high. Recorded over the course of a string of shows in the midwest supporting Blue Oyster Cult, the album is the last recorded performance of the classic UFO line-up complete with Michael Schenker (not including the '93 reunion). This album marks the end of the '70s, the end of "UFO JAMS." I can think of no better live album (Thin Lizzy's Live And Dangerous comes real close). Oddly enough, I see this record quite a bit in thrift store bins or sidewalk sales and I always wonder "What kind of empty motherfucker wouldn't enjoy this. Why is this here? UFO JAMS!"
Here
Posted by Aesop at 12:01 AM

Re: the gravity bong (we call this smoking a bucket here in reindeerland) the last two lines in the third verse of Darkthrone's Natassja in eternal sleep go like this:

Pass the bottle, pass the knife,
Pass me your unholy crafts

maiden jammed doctor doctor through the p.a. when i saw them in june.

great album! i recently discovered this jam while on a strange substance known as salvia. the song "love to love" really put me in a strange state of mind.

Judas Priest - Unleashed in the East. Still hands down my favorite live album ever. All the best material from their greatest era (Sad Wings of Destiny through Hellbent for Leather) in superior form. Not a weak track in the bunch.

UFO were always one of those 70s bands that managed to escape me despite having heard of them for many years. I'll have to give this a good listen.

Yes, "Unleashed in The East" is great, although I question just how "live" it is.

"Unleashed" is about as live as "Maiden Japan" or whatever the hell that album was called.

Didn't we talk about this album about a month ago?

All live albums take some liberties, but "Unleashed" just takes more. Still a great listen and I agree, their best songs from their best era.

you know re: live albums... i just broke out saxon's the eagle has landed. still pretty damn solid.

of course, the undisputed king is no sleep 'til hammersmith... fact.

Anyone interested in how good a live band could and should be should check out my post on The Dogs from some time back...

Awesome. I like all of UFO's first albums and a record called space metal. Thanks mucho
and Ludicra rules

great record.thank you for this.my personal favourite live record,though,is Hawkwind's "Space Ritual". the Dogs live set is really awesome.everyone into kickass rock'n'roll should check it out.

Ah UFO, the only band, according to Anthrax, that can use keyboards and not sound "gay"

my favorite all time record , i own 6 copies of this (2 on vinyl)4 on cd - vinyl version,expanded version,remastered and japanese import)
jc

I liked the UFO, good without being too 70's. As far as the live albums I have to agree with Jeff on No Sleep Til Hamersmith being hands down the best live album ever. Aesop, I don't comment here enough, but I did want to take a second and thank you for your time and energy. The words and the mix really make this one of the best sites out there. Thanx again.

I highly recommend UFO's early LP: "Flying". It is is pre-Schenker. Fucking awesome!

Cheap Trick at Budakon is a badass live record.

Somebody already mentioned "Space Ritual" but I want to add my backing to it.

I picked this up on a whim for $5 about 3 months ago and it didn't leave my turntable for weeks. The riff strut mastery of "Natural Thing" lays in the hook and the rest of the album just pulls you along for the ride....great stuff.

you know, i totally forgot what a great live lp ac/dc's if you want blood... is.

Indeed it is Jeff. Thanks for the link.

Plenty of great live albums in the 70's & 80's... But how about the 90's? I'd go for 2 Norwegian ones: Motorpsycho's Roadwork Vol. 1: Heavy Metall iz a poze, hardt rock iz a laifschteil and Turbonegro's Darkness Forever!

I should post "Darkness Forever" it is out of print as far as I know. Thanks for the tip.

I am also a fan of Mayhem's "Mediolanum Capta Est,"
especially where Maniac says "Is the Pope Here" because they're in Italy. Like the Pope would go see Mayhem, he's more into Burzum anyway.

"hole in my pocket, hole in my arm" has to be one of the best rnr lyrics ever.

UFO was chocked full of great lyrics. "Natural Thing" being the best song about VD ever.

this SOOOOOO JAMS!!!!
my jaded black metal brain sometimes forgets the incredible music that came before all the 'exteme' stuff

Speaking of UFO and Judas Priest, I saw the latter open for the former at Santa Cruz Civic auditorium in April 1979. What a gig -- the place looked like a high school gymnasium and I was right up against the chest-high stage. Anyway, here is another great UFO performance: http://concerts.wolfgangsvault.com/dt/ufo-concert/20052670-8289.html

If you haven't seen Wolfgang's Vault yet, you're in for a treat. Lots of live gigs from the 1970's best bands. LET IT ROLL!