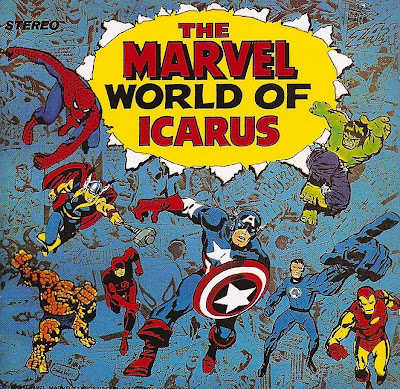 What we have here is either the heaviest novelty record ever made, the goofiest psych album ever made, or both. Icarus hailed from the UK and released a few forgettable singles before recording their only LP, The Marvel World of Icarus, a conceptual album based on the Marvel Comics universe. Imagine if Three Dog Night or Blood Sweat & Tears sang about The Fantastic Four and The Hulk rather than world peace and spinning wheels and you get a pretty good idea of what this sounds like. Rumor has it that Stan Lee never gave permission to Icarus and the record was subjected to a cease and desist, so all existing copies were destroyed, making it a record collector's wet dream. These rumors have been neither substantiated nor denied. So if you have been waiting your whole life to hear rather generic psychedelic hard rock with lyrics about superheroes, today is your lucky day. So goofy and ill-conceived, you'd have to be pretty fucking square, or one of those tight-assed DC comics fans not to enjoy this.
Excelsior
Posted by Aesop at 12:04 AM

I always thought it was the Marvel fans who were the snobs and rightly so for the most part besides Watchmen and some of the Vertigo series. The Watchmen movie comes out next year doesn't it?

"Henry Rollins Short-Shorts and The Sack of Doom"

i Can not wait to hear this gem of an album.

I told all my nerdy comic friends to check this out. They will cream their Hulk Underoos at the mere idea that this exists. When I listen to it, I'm scared I'll do the same!

"Henry Rollins Short-Shorts and The Sack of Doom" almost made me pee myself just now.

This album sounds... I'm not sure, but I'm interested.

Vlak Vlag. Just because it sounds phonetically like Black Flag.

This album has just restored my faith in rock music. Amazing!

One word for this: RAD

I believe MARVELous is more appropriate, but I get you.

This is pretty great. Not, like say, discovering you have the power to regenerate, and you have retractable, razor sharp adamantium claws, great. More like, being a brilliant scientist,being able to shrink really small, and make ants do your bidding, great. Meaning, it's not something you need to pull out all the time, but once in a while it would make a party more entertaining.

Madame Masque?! Who did she have to blow to get her own song?

Yeah, I had the same thought. Kind of a slap in the face to Daredevil.

Not to get all nerd on you or anything, but I believe the Man Without Fear song is about Daredevil

Ahh, that's right. Forget about that one.

hey, can you please re-upload this? - the link is dead.. thank you in advance

Can you please, please, please pretty please re-up this? I can't explain to you how important it is that I hear this. Thank you in advance and thank you for the silly awesome blog.

I hear the desperation in your post. Done and done.

So awesome. I can't thank you enough. Amazing. You straight up rule boss. Thank you.