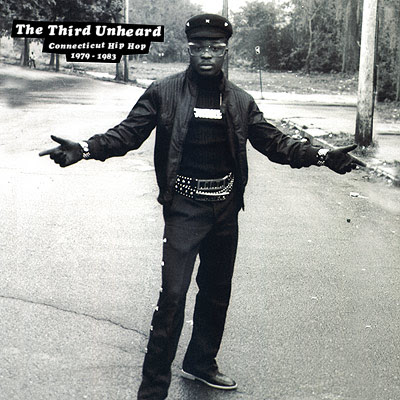 That's right, old school hip hop from, of all places, Connecticut, a state not generally known for much of anything. This compilation collects 14 amazing cuts recorded between 1979 and 1983, you know, when hip hop was playful and fun and not full of macho posturing assholes. The majority of the work here was the product of scene linchpin, Mr. Magic. Mr. Magic was a Fagan-like character who owned a record store and a label, both called Magic Records. The tracks aren't far from what their New York counterparts were doing at the time, just with a dash of Constitution state naivete. My favorite bits have to be the pre-pubescent Pookey Blow's "Get Up and Go To School" and "Ventriloquist Rap" by Willie Brown & Woodie. Willie Brown believed that rap and vetriloquism make for an exceptional cocktail of goodness, unfortunately the world wasn't ready. Are you?
Yo!
Posted by Aesop at 12:11 AM

Weird. I watched Wild Style last night and before I went to bed, I said, tomorrow I'm going to find the most obscure old rap there is. This morning when I got to work this was the first thing to pop up on my google reader. Thanks! serendip-dap-dippity-tous!

If anyone is interested,I found a decent Hip Hop blog last week that has some great albums if you are willing to scavenge through the many mediocre ones. http://underground-babylon.blogspot.com/2007/12/dj-greyboy-p-jays-unda-pendent-hip-hop.html

Aesop,i read that you are into Harvey Milk on here somewhere,do you have anything hard to find or maybe some of their singles. I have all the full lengths,but not the singles collection or the Kelly sessions,I can't get a hold of those. I'm not a long time fan by any means.The first album I heard was Special Wishes. I've got a Love reminded me of Body to Body,Job to Job era Swans and the Leonard Cohen cover on their 2nd Lp sealed it. I missed them in Boston but you and everyone else that saw them give unfaltering praise. I heard their singles are quite a different animal than their Lps. I just want to get my hands on them......Troy

I only have their full lengths, but I think my neighbor has The Kelly Sessions. Here's some links to recent live sets:

I take it that the show you saw was the one from Kill the Cat?? The Recordings are very fine quality.Thanks!!!!!! I don't mean to suggest what you should post,I really enjoy the surprise everyday and it surely is anything but predictable.I just love the band.....Troy

No worries, Troy. I welcome suggestions and requests.

Hey Troy. The Singles Collection and the Kelly Sessions CDs are both still very available. Check AQ or even eBay for your one-stop-shopping of these great HM releases!