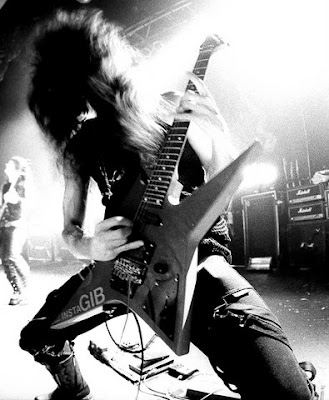 You know that you've reached the craggy peak of Mount Shred when someone is willing to release a CD of just your guitar solos. And seriously, why not? Morbid Angel guitarist Trey Azagthoth's solos are unlike anyone elses, they are expressive, fluid and oh so fucking weird. Take the solo in "Angel of Disease" from the 1993 album Covenant, you know, the one that sounds like a flock of possessed seagulls descending to peck your eyes out. Or the one in "Rebel Lands" from Blessed Are The Sick that sounds like a snake charmer, you can almost see a cobra rising from a Pier One Imports basket ready to bite you in the sack. In 1999 Morbid Angel released a special limited edition bonus CD of nothing but the solos from Formulas Fatal To The Flesh, called Love of Lava. The solos take on new life here. Love of Lava is more of a collection of abstract, experimental pieces than a metal album. This is the European version with extra tracks. Love that lava.
Here
Posted by Aesop at 4:08 AM

Seriously, Do you know anyone personally that can solo like that.I surely don't,not even close.This might be fun to sample next time I break out the old tascam 4 track.Thanks again

I've noticed you like E.N. Did you see them with their air compressor on the pepetuum mobile tour in early 2004.I caught up to them in Boston @ the Middle East.That place really couldn't hold them.

Sadly I have never seen EN. Love Laibach and will probably be seeing them here in SF in September.

Did you see this?

Nope, I hadn't seen it.Never would have imagined in a hundred years. Didn't know they were touring the states either.Maybe I can catch them in NYC.I love Vermont being a native and all but it's a real pain in the ass to see all the Legends by chance they come through.We do have a venue at the Unitarian church that sounds decent.It only costs $50 to rent and that ain't so hard to make.Either of your bands touring?If so, don't skip Vermont!!!!!!!!!.Ever been through here with Hickey?........Troy

None of the bands I have been in have ever played Vermont. I went once as a kid, it was beautiful there.

I just tried to play those remixes and they are not Mp3 and my computer won't play them on Windows Media Player.Do you know how to convert them by any cahnce.If not what a god damn tease.I would have been the life of the Party

I don't but someone reading must.

or you could try this one...

No Luck,thanks for checking though. You hit the nail on the head on one of your past post comments though. Cosmic Hearse surely comes across as you genuinely being excited to show us all something you are wicked e about.That's what you are aiming for and it shows. I have a few blogs I check daily and for the last month or so(since the Fathers Day Post,which I really appreciated)Cosmic Hearse is the first.Others are Stay Female Fronted(who offers all 3 Ludicra full lengths and almost the whole Contropotere discography!!!!!!!!!!)
,Lucidmedia,Lo Res Viscera,and The Course of Darkness(have you seen this,I can't believe it hasn't been shut down,what a fucking wealth!!!!),and now the Blasting Concept as well.I mean to check all of your links as well, where would one start?????............Troy

Go ahead and check them all. I have found something great in all of them. For black metal, I highly recommend Dunkelheit. True Punk & Metal is really great too.

How fucking cool is THIS !!!

Even today when I don't really care much about death metal (not like I used to anyway), Morbid Angel and Azagthoth's guitar skills will probably always remain amongst my favorites in that area haha. Never really thought about giving Love of Lava a listen though, so thanks!

His guitar solos truly are bizarre and unique, not the typical modern shred tone - it's almost like Hendrix crossed with early Van Halen and Zappa.

did I mention that zShare sucks so fuckin' bad ..as bad as massmirror

link is dead, coulda been cool I guess but haven't heard it cuz the f'n link is f'n dead

Indeed, tis why we no longer use it.

I'll see if I can reup this somewhere else but I don't know if I still have the files. I had an older hard drive go fucky on me.

thanks for reply, not used to anyone ever actually answerin here, meant to get back to say I found it , finally learned trick to searching for ??? blogspot, thanks again for all other cool stuff,

Aesop, please repost. I want this, and the link is broken.

Thanks for re-upping this. I was really into Morbid Angel in my middle school days of metal, but haven't listened to them since. Will give this a spin.

Azagthoth = only living guitarist who could concoct a listenable record of nonsense soloing. (Though I admit I would seek out a similar record by Ronni Le Tekrø if this existed.) His is a style that makes jokes of the very idea of anyone else picking up a guitar.