We Came To Destroy 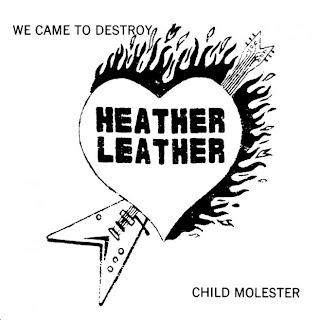 Heather Leather, three fresh-faced, teenage Mexican-American sisters from San Antonio, Texas. Ruth Garza played bass and sang, Sylvia Garza was on guitars, and Sandie Garza played the drums. With a a passion for the classic heavy metal of Judas Priest and their heroines, Girlschool, the Garza's adopted the name Heather Leather and began rocking in their parents' garage around 1980. In 1984 they were featured on the great Texas comp Metal Moo Cow (anyone out there have this?) alongside Scratch Acid, The Offenders, Fearless Iranians From Hell, and The Hickoids, among others. A privately pressed 7" was produced in 1985 with money borrowed from their father who was sure the girls would skyrocket to the top. One listen to the two songs here will reveal why Heather Leather isn't exactly a household name today. While the girls were brimming with enthusiasm, they were a bit short on talent. Nonetheless, little, self-produced records like this are exactly why the Hearse exists, so without further ado, I present you...Heather Leather.
Destroy!
Posted by Aesop at 12:11 AM

Man they seem like a more punk Heart which is just fine in my book...Troy

oooh wow yeah..very off key, but at least the cover art is cool.

Although an entirely different thing musically, they probably had at least as much talent as more well known bands like Venom.

True, or early Sodom for sure.

Damn, Son! You got some Deities and Demigods all up on your header now? that's deep!

Thanks for that one. Always wanted to hear that and now i did... Although I rarely can stand metal or let alone hard rock, that one was fun!

hello.
Last night I sent an email to your hotmail with the metal moo cow. I should have wrote this last night (on your website) but I was not thinking properly. So now I write. thanks mucho
-c

Heather Leather were from the same neighborhood that my grandma lived in.

When called into sub for the singer of the Raging Woodies, (for a show with Big Boys, Minutemen and Hickoids at Liberty Lunch no less) and not knowing any of Trent's lyrics, I fit the lyrics to "We Came to Destroy" along with the bomb roar into a Raging Woodie song. It became a standard for us, though it was a pretty mean thing to do.

I have that Metal Moo Cow compilation, I only have it digitally though, no hard copy. if that's kewl with you.

Went to San Antonio the other week,the metal band Midnight were playing down there...went to hog wild records and shaun(Midnight) and Charles(my mind's eye records) were all jazzed because they both scored Heather Leather 7"s...Shaun was also stoked 'cause he scored a cabbage patch kids record....Anyways I still Haven't heard this Heather Leather...oh well.

hails
great blog :)
Is there a chance that you can re- up the link for the bands single? thanks :)