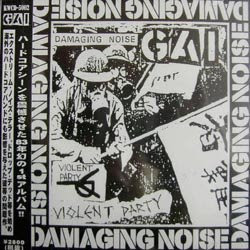 Perhaps you already know Gai. If you don't, this might be a bit confusing. Gai were another noisy Kyushu hardcore band under the tutelage of fuzz punk legends, Confuse. Gai were responsible for starting the great Violent Party label that released tapes and flexi discs by Confuse and Gai, among others. At some point the members of Gai started operating under the name The Swankys and playing more '77 style punk rock. Both bands existed at the same time for a period, often playing the same songs. This, as well as many bootlegs with misinformation, only added to the entanglement of the band's history. Granted, I could be spreading more misinformation myself. As far as I can tell, Damaging Noise was Gai's debut and was first circulated throughout the Kyushu scene in 1983 on home-dubbed cassettes. Later it was a 12" vinyl. Gai, like Confuse, weren't overly concerned with musicianship or any kind of production values, just noisy, chaotic hardcore on the verge of exploding into complete white hiss. Gai, unlike Confuse, seemed to have a bit of a sense of humor at times. Both bands created a scene, a sub-genre of lower-fi racket in the already truly fucked up Japanese Hardcore universe. There is a reason people go nuts for Japanese punk and hardcore records and it starts here with Gai's Damaging Noise. For a more academic rambling on the merits of Gai, Confuse and other far eastern ear pollutants check out Shit Fi's excellent piece on the subject. In the meantime, get this.
頂戴 本
Posted by Aesop at 12:00 AM

thanks for all the tunes Aesop. your the man!!!!

Man, it isn't too often taht I have something that you post which is why this and Kick to Kill are my favorites.I like alot of others like Fugitive Equilibrium and Stay Female Fronted etc. but this is great.The only things I have already had are Earth 2 and the Trouble album I think.All this adds up to a great blog.But yor hear that enough. I love Gai and a ton of other Japanese bands.Crow, Conga Fury and The Comes are some of my favorites too.I haven't heard this though.I'm wicked excited!!!!!!!

I could not have said it better myself.

Slobo, glad your back. I still owe you some drum tracks.

Oh yeah, I was wondering what happened to that. How about you drop me a line at my full username without spaces @gmail.com?

Oh man,THANKS for this amazing post...the only problems is that Zshit is not working,so i'm blocked here listening The Swankys and drooling on the cover of this amazing LP...could u please repost this?maybe on mediafire/rapidshare? it would be much appreciated

Both Gai links work fine and are on Mediafire.

GOD!! finally i can get my hands on this!! many thanks man...

Pretty funny how much this sounds like "satanic Blood"..

Thanx for the upload!