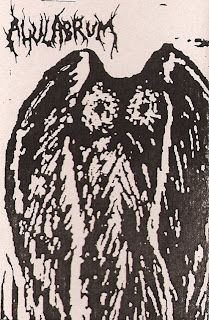 Ahulabrum is a mysterious Black Metal band from somewhere in the United States fixated on UFOs. Magonia was released on tape in a very limited run and contains five strange and noisy songs, each one based on a different UFO related phenomenon. Ahulabrum has succeeded in creating sounds as bizarre and uneasy as its subject matter.
The second track "The Rendlesham Forest Psyop" is about a number of UFO sightings in Suffolk, England in 1980. It's essentially the British Roswell. Track four is based on an incident in Cajneiro, Brazil on November 11, 1983. A farm worker encountered a heavyset, green, glowing figure obstructing the road. As the figure approached, it changed shape, assumed a strange yoga-like position, and vanished. The final track refers to Filiberto Caponi, a 23 year-old Italian who claims to have had many encounters with an alien being. He took six Polaroid pictures of it. Magonia is buzzing, chaotic and wholly disquieting. I really need to hear more from this brilliant band.
Here
Posted by Aesop at 12:00 AM

hmmm, aliens... there´s nothing impossible in the U.S. it seems!

I even discovered an american who claims that he´s been abducted by aliens, has been taken to their planet and kept there for years to learn their style of martial art! after he had mastered it they sent him back here to teach the deadly art of GRAND CELLESTIAL DO to the rest of us!

after mastering this violent, vicious art you can knock out anyone, or even kill if you wish so, with an energy bolt from your belly button!

I want to study Grand Celestial Do.

I'm a UFO/alien fanatic, so this is getting me hard. I should have thought that black metal would stretch even to this subject matter. Cheers for the obscurity!

according to the GC-Do grandmaster you live in E.T.´s chosen country! if not why the hell would the take an american, teach and send him back to pass on his knowledge?

and just imagine what the shows of your bands would be like?
- you could give the audience an awesome light show while playing drums with the energy bolts out of your belly button!
- you could have more unconscious girls at your shows than the beatles had!

So good, thank you very much! Do you have any more or any info about this band??

They have a myspace page...

this one really piqued my interest. I've always been scared of aliens. It took me forever to read Communion because it freaked me out major. It's definitely scarier than Satan to me.

I want to meet these guys. You just know they're interesting. When they were done recording, did they listen to their songs and say to themselves, "Yes! That's exactly how we hoped that would sound"?
Crazy but kind of fun to listen to. Thanks for finding and sharing this.

i'd like to see these guys stretching their songs to greater lengths for full hypnotic effect.nevertheless another interesting obscure black metal band.thank you.

The "mothman" is a flying Reptilian humanoid. A.K.A. a dracon.

So stoked to check this out...thanks!

It's good and dark. Yeah, that's Mothman...d'joo see that movie with Richard Gere? It was pretty good, for a Richard Gere movie. The mothman isn't a dragon or dracon, though, I think it is a remotely controlled extradimensional robot/machine...probably not made of regular matter. I hope that doesn't sound too crazy. Read John Keel.

Indeed it is a good movie. I actually just bought the Keel book from Amazon for a penny, I was inspired to read it by this band. That town has turned the Mothman legend into a pretty thriving tourist industry.

That's pretty wild...if a UFO came down in front of me and I heard this music...I think I'd poop.

Thanks for putting this up! Another dark, warped path for Black Metal to wander down...

Lugubrum is high on my list of great eccentric BM bands for sure. When Agalloch was in Belgium one of those guys came to the show but I found out to late to pester him.

Jeez, I'm glad I listened to this one in the daylight. Freekin scary.

My own little observation: the purported nokturnal activities of our little visitors has been compared to tactics employed by fascist governments (sneaking around in the dead of night, operating with total disregard for basic human rights, abduction, torture/strange experiments, etc.), and seeing as many, if not most, BM bands lean toward fascist ideals (elitist, racism, disdain for democracy), the BM stylings of Ahulabrum are a match made in Lovecraftian interdimensional spaces.

Steven, Nazis and UFOs have many connections. The best examples are the myths and rumors surrounding the Vril Society and the writings of Louis Pauwels and Jacques Bergier. Do some Googling around and have your mine blown.

>I believe that is in image of the Mothman on the cover art.

It IS Mothman!
A youth wasted on paranormal bullshit such as mine can't lie.

Too wierd. I HAVE to try this out. Cool blog, by the way.

This band is inspired! The Rendlesham Forest forest UFO crash is pretty interesting, most likely it was a cover story for the movement of nuclear weapons, though Rendlesham Forest itself is a strange place; it's haunted by phantom black dogs & an creature known as The Shug Monkey, a spectral Bigfoot type creature. No shit!

If you have some spare time, would you mind fixing this link? Zshare is down for the count. I should have downloaded this earlier but had to clear disk space.

Thank you very much for fixing this!

thanks. poloroid link was awesome.

Thanks for this!No child "satan is my master"
Isso realmente é o que espero do black metal, sem a infantilidade do "satan my master"

after months of searching ebay & co i finally found a copy of this tape!
thanks again for introducing this great band!

do you know when this was recorded?