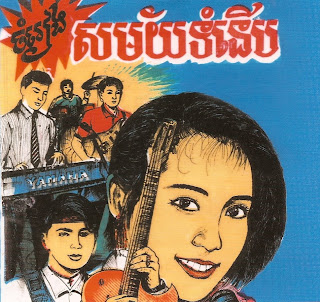 Okay, I am a huge fan of the Sublime Frequencies label run by members of The Sun City Girls. Over the last decade the label has released what they call "obscure sights and sounds from modern and traditional urban and rural frontiers." This includes folk and pop from Southeast Asia and the Middle East as well as field recordings, radio broadcasts, and ceremonial music from all over the globe. The label's releases are produced in limited quantities (usually 1,000 copies), and are generally not reprinted.
My all-time favorite Sublime Frequencies release would be Cambodian Cassette Archives: Khmer Folk & Pop music Vol. 1. Every song is a charmer, a hook-laden wonderland of primitive pop goodness.
Mark Gergis rescued over 150 Cambodian cassette tapes from the Oakland Public Library's Asian branch. He set about the daunting task of listening, archiving, and culling the best tracks for inclusion in this great compilation. Most of these tracks are from the post Pol Pot genocide, however there are a few numbers recorded before the Khmer Rouge's bloody rise to power. Knowing that some of these performers (like Sim Sisamouth and Meas Samon) probably ended up as skulls in Cambodia's killing fields adds an air of creepiness and sadness to these otherwise playful recordings.
Here
Posted by Aesop at 12:29 AM

Great post. Sublime Frequencies is one of my favorite labels too. Thanks for reminding me I have to catch-up on some of their recent releases.

Aesop can you tell us what year for each post or at least track it in itunes with the year.

Come on, Nick, don't I do that already?

usually you do and i guess it's not that hard to look it up on the web. thanks Aesop great post

Music like this, I won't find anywhere but here. I suppose that can be attributed to a lack of unearthing on my part; but i'd prefer to give kudos to you aesop. thanks.

Very interesting you post this.I have known Mark for years. Have you checked out Neung Phak? I ended up meeting Alan as well after one of their shows. Great stuff, had this on my list to pick up as well. Great post.

Bob, don't know Neung Phak. You (and anybody else reading this) should definitely pick this up for the great music as well as the great liners and packaging. Perhaps it is out of print but I still occasionally see them used (why?) and end up buying them for friends. I don't know anyone who doesn't love this record, even the hardest of die-hard critics and tough guy metal fans melt when they hear these songs.

Neung Phak is Mark, Peter Conheim (monopause, negativland), Brently (3 day stubble) and a few other folks I don't remember. Alan from SSG did some awesome vocals for part of their set when I saw them. If you like the stuff from Sublime Frequencies, you will probably dig their stuff too. Next time I notice them playing in town I will bug you. It's a nice change from the disfunctional SF metal scene.

This is the coolest damn blog ever. Thanks heaps.

So basically I'm really late to the Sublime Frequencies party, but I finally checked out the other albums you've posted and they were fantastic. If this is their best comp ever then I've got to hear it. Alas, the Zshare link has vanished. Any chance of a re-upload at some point? I'd be much obliged as always. Anyways keep up the great work!

Link is gone dead on this one, great blog.