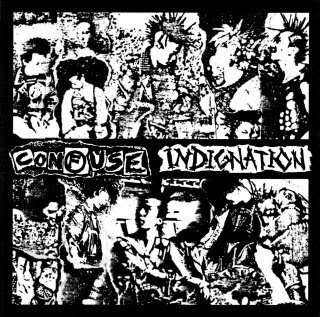 Confuse's first full-length, Indignation, originally appeared on the Japanese scene as a cassette in 1984. Though this was their debut release, the band's earliest recordings from 1983 weren't released until 1987 as the Spending Loud Night EP. If you haven't been paying attention, Confuse were the absolute kings of crazy fuzzy Japanoise punk. Taking the groundwork laid out by Disorder and Chaos UK and tweaking it into abrasive white hiss, Confuse (and their buddies Gai) set the tone for what would be the Japanese noisecore aesthetic. Okay! Fuck! Die! Star of FIVES!!!
これで
Posted by Aesop at 12:04 AM

Another piece of Japanese Gold. A must have.

thats some seriously fuzzed out noise

Thanks! You've made my weekend. It sounds like the band's playing along with a chorus of ornery nocturnal rainforest insects, and in no way is that bad...

While we are dealing in Japanese mode, Aesop, are you a fan of the band Jurassic Jade or the Doom from Japan..........Troy

Yes, I like both okay, not super into either.

Great stuff, thanks! It is interesting to hear some of the songs that are also on Nuclear Addicts and the Spending Loud Night demo. This is really fun stuff to listen to!

Anyone know lyric to General Speech (or any of the others) from Stupid Life 12"?

Confuse are my gods.

Hey buddy, I think you should delete all your Confuse uploads, the record is still being sold:

Any chance you could re-up this? Thanks.