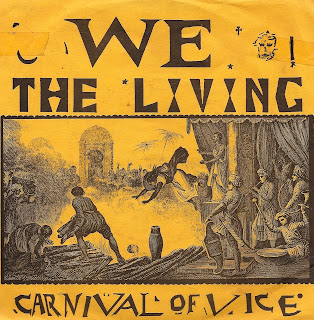 We The Living were another great South Florida hardcore band that you may have never heard of if you grew up anywhere else but America's flaccid dong. Made up of members Kraut, Adam, and Megalosaurus, WTL were miles ahead of their contemporaries in terms of musicianship. The Carnival of Vice seven inch EP was released in 1985 on Subversive Records, which was run by Mark of The Sewer Zombies. In the '80s hardcore bands thought it was really hilarious to cover unlikely songs, in this case Madonna's "Material Girl" changing the title to be "Mixed Up World." That's about all I got on this one. Enjoy!
Here
Posted by Aesop at 12:00 AM

Were these Buddies of yours from back in the Day.2 songs in and I love the guitar riff on Shamade,it don't really fit with the rest of the 7inch.and the interlude on bingo,man I love the unpredictability. And the intro to abortion attempt just came on,and that is great too. And last but not least,the drummer is pretty good too..................

Somebody gave me this record years ago. Great weirdo hardcore.

not bad stuff. i'm sure seeing them live would have been a better experience. this is a member of kraut from ny?
on an unrelated note, does anyone know of a way to convert m4a files to mp3s without having itunes...i've downloaded several posts and then find that i can't play them. any help folks? thanks.

No this band had nothing to do with the band Kraut. They just had a member who was named Alan Kraut.

I always thought they should have called themselves "AAA".
Triple A's
2 Adams and an Allan.
They had talent for sure...and rich parents for support :)
I loved hanging out with them.

That they did, Mark. They always had really nice gear. You still in contact with any of these folks?

Nah,the 2 Allans moved to Boston or somewhere up there.I think Kraut does some sort of production.
Adam (Mega) I lost contact with after I married his Ex.
I should have left her with him lol because that ended in divorce anyways.
I saw his dad in a mall about 15 years ago.Not much was said just hello's.