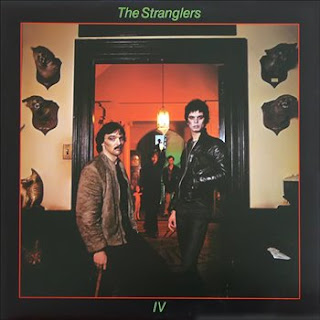 Rattus Norvegicus, The Stranglers' first album from 1978, is so fucking great that I shouldn't really have to tell you about it, but I will. You see, the band started in 1974 and was kind of part of the dreary pub rock scene. They soon outgrew this world and were considered too eccentric and artsy for the Guinness-swilling work-a-day chumps down at the local boozer. It also didn't help that Hugh Cornwell's lyrics were often biting digs at English life, he was a notorious shit-stirrer. The Stranglers landed some gigs opening for The Ramones and from then on they were linked to the punk scene in England. The Stranglers were really only punk in spirit and attitude. Very unhip organs and keyboards swirled around their herky jerky songs and Cornwell's lyrics coated everything in venom. The Stranglers took some heat from feminists for some perceived misogyny. So what if these guys were dicks, this is a classic.
Here
Posted by Aesop at 12:22 AM

i love this album

I saw them play an outdoor festival years back when the new singer was fairly fresh. Joe Satriani played straight after. I remember getting some dirty looks from friends' girls because I stated that I had no interest in seeing guitar wanking since the Stranglers had just played. They'd never heard of them. This really is a great album.

I'm 30 years old and have never heard this. Might be the time to pick this up...

hey, thanks for this. Maiden have mentioned these guys being one of their early inspirations/favourites. DLed a "best of" a while back..."Peaches" is an awesome song. However I'm assuming a lot of their later stuff was crap, because apart from the first few songs this comp. was pretty useless. "No More Heroes" is another good un.

oh wow this sounds like blue oyster cult with gg allin. i never would have thought i'd hear a good stranglers song but obviously i was listening to the wrong albums. between this and the scorpions, you keep turning me on to stuff i would never ever give a chance. thanks!!

Yes, I'm not really all that into any of their other records but to be fair I haven't spent much time with those. This one just does it for me. So much pomp and swagger.

"No More Heroes" and "Black and White" are both great albums as well, I'd even say as good as their first. I couldn't get into anything they did after that though. Great band! Wish someone could reccomend more bands like them.

Another band I'm not familiar with, and I have to say I'm halfway through this and every song so far has been a total winner. I'm really diggin' this. Thanks again Aesop!

Stranglers, wow.. a band with so many different styles.. I think they were one of those bands that were all over the place.. which in turn might have made their popularity less..good band imho though.

Hi Aesop can you please upload to Mediafire or Megaupload? Zshare is...well...you know

stranglers are one of the greatest things to ever happen to music. some seriously fucked up dudes making seriously fucking killer sounds.