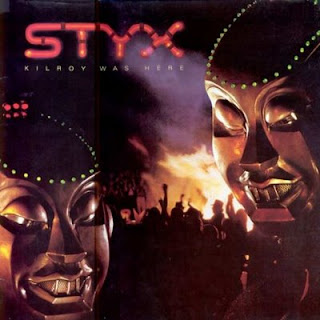 Written by Dennis DeYoung, Styx's, terminally douchey frontman, Kilroy Was Here was a bloated, pretentious, and absolutely shitty concept album/film/stage play that flopped even though it yielded a couple of hits for Styx. Their previous album, Paradise Theater was a critical success and the band, and especially Dennis, felt they could get away with anything, including a hackneyed, dystopian, allegory about censorship with racially insensitive Japanese robots. The story is so pedestrian and goofy it reads like a particularly subversive high school play. Here's the synopsis from the album's liners:

"T H E P A S T... Dr. Everett Righteous, founder and leader of the MMM (the Majority for Musical Morality) became influential in American politics through the use of his own cable/TV network. He spoke about the evils of Rock 'N Roll Music and how its permissive attitudes were responsible for the moral and economic decline of America. He was charismatic, entertaining, and above all, he understood the media. The MMM soon gained enough power to have Rock N Roll banned.
"Robert Orin Charles Kilroy was a world famous Rock N Roll star. As this new law was passed, Kilroy and his band were finishing a national tour. Their last performance at the Paradise Theater would serve as the test case. On the night of the concert, as Kilroy played to a packed house, the MMM marched in and stormed the stage. When it was over, an MMM protester was dead. Kilroy was convicted of the murder and sent to a prison ship with other Rock N Roll misfits.
"T H E P R E S E N T ... is a future where Japanese manufactured robots, designed to work cheaply and endlessly, are the caretakers of society. Mr. Robotos are everywhere, serving as manual labor in jobs that were once held by humans.
"Dr. Righteous enforces his own morality by holding nightly rallies where crowds hurl Rock N Roll records and electric guitars into huge bonfires. Jonathan Chance, the rebel leader of an underground movement to bring back Rock N Roll, has made Kilroy the symbol of his cause. Meanwhile, Kilroy has spent a number of years in prison. With no hope of release, he is subjected to the humiliation of mind control via the MMM cable network. In an attempt to contact Kilroy, Jonathan jams the airwaves of the MMM network, replacing a mind control session with outlawed footage of a Kilroy concert. Inspired by Jonathan's message, Kilroy plots his escape. Late one night he makes a daring attempt to free himself by overpowering a Roboto guard. Disguised as a Roboto, Kilroy moves freely throughout the city leaving graffiti coded messages for Jonathan. Jonathan discovers the rock code which leads him to the old Paradise Theater, now the site of Dr. Righteous Museum of Rock Pathology. There he sees the last Kilroy concert mechanically depicted by Kilroy look alike robots as the violent end of Rock N Roll... and there he and Kilroy meet for the first time."

Domo Arigato
Posted by Aesop at 12:00 AM

I can't read "Rock N Roll" without hearing "Rocken Rowle" inside this head of mine.

wow, i didn't know the story behind that record. sounds like a pretty awesome story to me. haha....

This album is pretty...terrible. I'm going to opt for the total bag of douche. Bloated. Pretentious. Downright awful.

After a pile of used Kiss records, this album was one of the first I ever bought with my own cash. I remember hearing Mr. Roboto on the radio, and to my 11 year old mind it sounded pretty radical. Meaning it sounded unlike anything else I had heard. Perhaps it was the use of vocoder. Whatever it was, my pre-adolescent self enjoyed this record VERY MUCH.

I never understood that this was a full on stage play. i knoew it was a movie of some kind, but I never understood where that movie showed and if it was 2 hours or 10 minutes. The story still looks kind of cool to me. I want to go to the planet of Rock and Roll criminals, or whatever!

I don't know what to say about Dennis De Young. he didn't seem like douche as much as just a guy who probably wanted to be writing for theater or something.

Posting a Styx record makes you a supergay, FYI.

Sad to say, when I was a kid I thought the storyline to this stinkburger was kind of cool. I mean, hello, robots!
Come to think of it, I still think it's cool. ROBOTS!
Thanks for putting this up. Now I can listen to "Mr. Roboto" whenever I want, which I suspect will be at least once a week till the end of time.
I'm a loser.

The finest pile of suck I ever picked up from one of those church rummage sales. It's terrible, really. But....I like it in the same way I like a lot of overblown concept albums. I picked up an Asia album at that place too. You know, the one with that big long Chinese dragon-thingy on it.

And don't worry if posting it makes you supergay. I'd totally do you.

i have a older brother who is ten years my elder, i have always looked up to him, from being able to roll a joint while driving and drinking a beer at the same time, i thought he was the raddest, he turned me onto a lot of great music, (early Genisis, The Police, The Kinks, The Clash, so on and so on) but he liked this band as well,
then this album came out, and well i thought there isnt enough pot in the world that would make this album sound good
even by big bro was like 'what a turd of an album'
Dennis DeYoung:Total Bag of Douche, i mean i remember one of those VH1 'where are they now' shows, he was on there saying how his band left him and went off on to do a 'reunion' tour without him, coz he gets headaches from stage lights
...or was that Steve Fairy, oops i mean Perry, of Jouney
either way i'm going to download this just so i can have a laugh

I remember on the Behind the Music, the members of Styx appeared to still be bitter about having to portray roles on-stage instead of simply being a band.
In all, pretty lame moment in rock. Not as lame as Rick Wakeman's King Arthur on ice, though.

Funny you should mention that Rick Wakemen bit. I was just watching a 1975 performance of that in YouTube a few days ago....ridiculous.

The Mr. Roboto tour was to be my first concert....as a 14 year old movie nerd, the whole scifi concept and short film had me going. My parents got cold feet - "There will probably be people smoking Marijuana there....." Anyway, long story short - I ran away from home the next weekend to see DRI in Dallas. Bullet dodged!....a mind blowing show and a lucky move that saved my 'first band' streed cred for eternity. I'll let you pull the lesson out of that one.....Oh, and Rick Wakeman rules.

i all honesty the 1st few styx albums are in fact pretty good hard rock albums but this is pure SHITE!!!

At ten years this album ruled. Yes I'm embarrassed as all hell to admit that now but I'd still watch the movie if was released. :)Not your best post but still kinda cool. Good thing I'm anonymous :)

Just how many fucking concept albums are there about a future where rock'n'roll is banned? The only good one I know of is Violation by Starz. I bought it way back in 1977 when I was 13 or 14, and I still love it (and their other three albums) to this day.