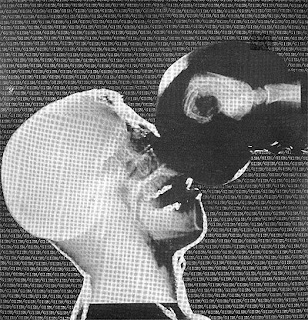 Human Condition, the German bootleg released in 1995 is regarded as the best, and most respectful of the gazillions of G.I.S.M. bootlegs. Clearly done by fans, and not as a quick cash in, Human Condition contains all the band's compilation tracks and some pretty good quality live recordings. It came with an eight page booklet with tons of cool art and other G.I.S.M. ephemera.

ok, here is a comment: you shitty big nerd with your gun! there are many other great blogs out there done by smart people... so, bye

hmm, i wonder what's up with the angry loser above? g.i.s.m.-hate? thanks for this btw.good, good stuff.

Am I a lesser man for never having heard G.I.S.M before? I'll admit for as much as I know about metal there is an equal amount of classic hardcore and punk I'll totally clueless about.

I've been trying to rectify this the past year or more but these genres are just like metal in some ways in that between new AND old bands there is such an overwhelming amount out there that if you don't get a head start when you're 13 you'll never get ahead of it.

thought you and your readers may be interested in this...

Vugelnox, it's never too late to discover the wonders of GISM, perhaps one of my favorite bands ever, but I say that alot.

I wanna see the booklet, greedy as always

The scans are in the zip, Slobo.

"Absolute Power" released this, and is also responsible for the CONFUSE discog., KURO discog. (I think), STALIN collection of early material, the early and live GISM LP (81-82...? I'm forgetting the years), and an LP w/ "Kuro: Who the Helpless," "GIL: To Us Conflict..., "Confuse: Spending Loud Night" (their best material), and "LSD: Jast Last." Not to get all record collector but as you said above, they add great information about the release and seem to be motivated by the archival aspect of the music, not profit. Thanks for sharing this.

Yellow Eyes, no need to apologize. We encourage people to share the information they have and get "all record collector". Is Absolute Power still in existence and do you know where we can score any of these amazing boots?

Ebay, brother, ebay. The comp. w/the 4 records probably came out in '95, Stalin was around '97 or '99...Not sure about the others, except the live GISM. That was the most recent one they did--like 2002-2004. They're all long gone. What's cool about these is they always have a DIY photocopy booklet for the info, often w/scans (READ: photocopies) of the center-labels, zine reviews (positive review from Tim Yo for CONFUSE in 1988...tough!) a history of the band and their own reviews. I've always wondered: 1. Who was behind these? 2. What are are they going to do next? (OH FUCK...I JUST REMEMBERED: they also booted the first two GAUZE LPs w/bonus tracks! THOSE were the most recent!) Besides ebay you can find the tunes on soulseek or another file-trading program. And with things like that, I'm not sure how much of an impact any future releases would have; e.g., the fans already have STALIN "Trash" MP3s. What could they unearth next? We'll see. OKAY. That's all for now. Thanks again.

Probably my favorite record cover of all time. I always wonder how these boots get distributed. Does someone walk into the store personally and sell to the guy behind the counter? Or do they actually order them from a distributor? I think I got this one at Rasputin's in Berkeley, mid to late nineties and it was sealed when I got it, no extraordinary price or anything.
Besides all that, the music on this one is fucking great.

this link appears broke...the insidious force that is zshare has perhaps struck again?

Hey I wanted to first, let you know that this is a great thing that you do. I stumbled across this a few weeks back and have been in heaven every since. I was wondering if you could re-post this gism - human condition I tried to download it about a dozen times but ezshare sucks! Now it is expired. If you can cool and if not cool to! Again thanks.

Thanks for the fix! You rock!