The Hand Of Death 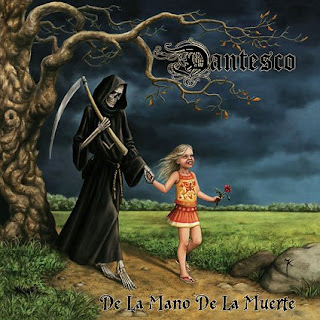 Dantesco's Erico La Bestia may very well be the greatest vocalist in metal today. He has more in common with Placido Domingo than Rob Halford, but with Dantesco behind his booming voice, the dish is Heavy Fucking Metal served epic with a side of grandiose pageantry. Dantesco hail from Puerto Rico. They formed in 2003. De la Mano De la Muerte is the band's debut and was released in 2005. The obvious comparison is Mercyful Fate, both bands are exceptionally classy, and both have extremely recognizable and proficient vocalists, but the similarities end there. Del Mano is an honest-to-goodness heavy metal album, one of the best in years, even if Dantesco has room to grow musically. They have since released another album Pagano, but I haven't had the pleasure of hearing it yet.
Aqui
Posted by Aesop at 12:00 AM

an underrated classic... this album rules..

"Unfortunately, the link you have clicked is not available."

Regardless, thanks for keeping cosmic hearse going with a constant stream of awesomeness.

The link is fine, I just checked it.

Man, I looked for about an hour this morning for a link to their 2nd Lp but to no avail. I was thinking about buying it anyway.If I do,I'll send you the Mp3's. You don't have it do you?

I have it, just haven't given it a listen yet.

this is some really great stuff, always appreciated!

Aesop are you familiar with Upwards of Endtime? One of my favorite newer "classic" metal bands.

Never heard of Upwards of Endtime.

Their 3rd album From Genesis to Apocalypse and Beyond just came out last year on Barbarian Wrath records. A lot of Manilla Road, Angel Witch and 70s-era Priest in there. Very worthwhile stuff.

Ahhh, Barbarian Wrath only releases quality stuff. I'll look for it, thanks.

Your description of this is so perfectly dead on. I dig it (description and album.) As always, thanks. I'm going to seriously need another harddrive.

troy, here's a link to the 2nd release.

strangely, I wasn't looking for it, but it was right. there.

It's odd that I was just listening to this the other day on the drive home from the Sabbath, Judas Priest, Motorhead show. The singer dude is amazing. He reminds me of the guy in Magma. I think the Dantesco singer needs a band that is as epic as he is. It sounds like they are holding him back.

This caught me completely off guard. Not sure if the vocals fit the drop tuning, this is first listen though...

Sounds great, like newer Root minus a black metal influence.