Don't Look It In The Mouth 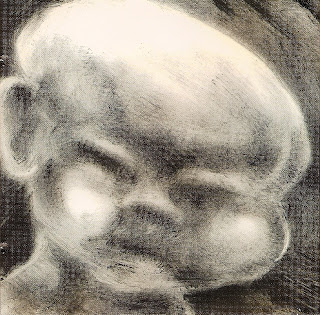 Gift Horse was an amazing, but short-lived, instrumental band from San Francisco that featured among its ranks, Doug Hilsinger on guitar, Dana Schecter on bass, and Jeff Whitehead on drums. Doug was a member of Bomb, who may have been the best SF band of all time. Dana went on to play for Angels of Light and later started her own band, Bee & Flower. Jeff went on to be better known as Wrest of Leviathan. Gift Horse released one album only, and here it is in it's entirety. It was recorded live in front of an audience at Klub Kommotion on January 30 1993. I was there. Gift Horse were waaaay ahead of their time which is evidenced by all the attention hipsters give to inferior bands like Pelican today. Gift Horse did it first and better. The rhythm section of Schecter/Whitehead just locks in to a mesmerizing groove in which Hilsingers skyward guitars just wail and scream over the top. This is topnotch musicians wrangling instrumentals that just don't get boring.
Here
Posted by Aesop at 12:02 AM

HHHHHHHHHHHHaaaaaaaaaaaaaaaaaaa.
nEVER LET BE SAID THAT aESOP IS NOT A MAN OF HIS WORD,BECAUSE HE SURELY IS,RECREATIONAL BOUTS OF DISINFORMATION ASIDE!!!!!!!!
i WAITED PATIENTLY AND YOU CERTAINLY CAME THROUGH FOR ME. dANA sCHECTER,IS JUST ABOUT, I DON'T KNOW I'M JUST ONE OF HER FANS. THANK YOU. IT SHALL BE A GREAT DAY.................TROY

Holy shit, dude! Thanks! I haven't even tried looking for this because I didn't even think they recorded anything. I dig Wrest's other projects and I'm not opposed to listening to him doing something different from a long time ago. Thanks again.

Ahead of their time indeed, thanks a lot for this one. I'll have to check out Bomb too.

i've had this and the album '8' for a while now and i concur with your comments. really great stuff.

Living in The Mission in the early-90's, Gift Horse were one of my favorite bands... I was at this gig too.. and many others by 'em. THANKS for another great post, brutha!

dana schecter you say? yes i will listen. thanks

whoa, I didn't know Dana was in Angels of Light. that is fucking awesome! I love that band. I loved Gift Horse too. thanks slop.

Thanks. I've been curious about this band since I heard Wrest once had something unblack and rock going on.

wow I love Bee & Flower's debut album What's Mine is Yours and have been meaning to get their second album for some time now. Such a relaxing band. Only a so-so fan of Leviathan but this album really is worth its salt, thanks for another lost gem!

another band I'd never heard of... definitely agree with your comments that they're ahead of their time on all the "post-metal" stuff, having been around in 93... great stuff, thanks as usual

wow. you never fail dude. this is good shit.

Did Jeff draw that creepy blob baby with the headlight eyes? I'm going to have nightmares now.

I am excited to listen to this!

Actually Dana did the art for this.

tight. This record makes my head bob like a bobbing thing.

i first heard a song by this band on Steve Kelly's KMBT show (by the way that's where i first heard about your wonderful blog).i really liked it but a further search on the web provided zero information about them.but now you come along with a whole record by them.thank you very much.i'm really eager to listen.

has the unreleased '8' album for DL as well.

Yep, that's Doug's site.
I miss this band, and venues like Komotion/Brave New World/Haze Theater/House of Debauchery/Night Break... what else was there?
Fuck dude, SF used to slay like that...

I hear you LRV. I feel like there are more quality bands now but there were better venues back then.

cja thank you very much.i'll definitely download.it makes me wonder how i missed that site.

stupid me,i have just realized that i have changed Scott Kelly's name to Steve.and i call myself a big Neurosis fan.my apologies to the man and excuse me for my blabbering.

Hey, I didn't notice that's Doug that books shows at The Eagle and is the nicest guy in show biz

THIS stuff is SO good

Gifthorse RULED. I think I saw almost every single one of their shows. So cool to see more people getting excited about them.

Wow. This shit is amazing Aesop.
Thanks for sharing...
Jeff is an awesome drummer.
-Rob

I have a video of Gift Horse playing live at (I think) the I-Beam...fuck I can't remember. That was from way back when...

Okay, I'm commenting waaaaay after the fact, but I just wanted to say that I really enjoyed this album. I usually have a hard time with rock music of the slow tempo, spacey variety, but this album is one of my favorite things that I've picked up from Cosmic Hearse.

One of the best thing found here. Thanks again and again. And thanks right now.

I came home after a few beers and searched my google reader for Pelican and this post popped up! I am just sober enough to have navigated to the download and BAM this shit is AWESOMEEEEEE!!!! THANKS! I am totes rockin!

Instantly loved this upon first listen and have since listened to it multiple times each day this week.

I would love to hear this, damn megaupload