Singing From The Grave 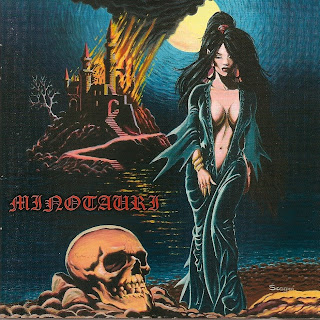 Minotauri was a Finnish band hell bent on the classic, towering doom of such luminaries as St. Vitus, Pagan Altar, Candlemass, and Pentagram, however Minotauri cut their own path and sounded little like their influences. Unfortunately, the band called it quits in 2007 after releasing their second LP. Here I present their first LP from 2004 simply titled Minotauri. Great riffs, typically gloomy comic-book horror lyrics, and the distinct voice of singer/guitarist Ari Honkonen make Minotauri a stand-out release. If the cover and my description don't have you frothing at the mouth with anticipation, I feel I should add that this was released by the ultra-elite cult label Black Widow, a label that only deals in quality darkness.

excellent band.i already had their 2nd album (great record) and know thanks to you i found this too.as most finnish bands they add their own personal touch to the genre of doom metal. i am eager to listen to this.

Good to see Zshare is treating you well. I've decided to kick my anti-blog habbits and am bringing it back from the dead. gonna take forever to re-up everything, but gotta start somewhere. If i figure out how to have a friends list or link to friends blogs on this site, i'll make sure to put ya up at the top.

haven't even finished the first pass yet and i already fucking love it. not that this is much of shock, given the source... thanks as usual man.

Dude yes - this is one of the best things i have gotten in the last 5 years. seriously - this is a great fucking record. "My Way" is so classic.

John, I have to out you for being in two very great bands yourself, Artimis Pyle and Fuckface. Say hello to Pts for me, and come visit us soon.

singing in the grave just made my 2008 halloween mix...

Thanks Aesop! yea - i am trying to swing a trip out there for the Halloween show. That is going to rule!

btw I forgot to mention the cover of the Minotauri record. Just look at that shit! amazing.

I have terrible vocalist issues and this guy is no different. Musically, I am really loving this, but I sometimes want to kick the vocalist in the nuts, though that would probably defeat the purpose and make him sound even more annoying. I am *trying* to get past it, though, because I really do like this one a lot and I have been known to get over my initial OMGDESPISE vocalist problems. And yes the cover art. YES.

Ahhh, the vocalist sort of ices the cake for me. He's not a "god" singer but he sounds sincere enough and I can't imagine anything else going over the top of this. BTW, he's the same guy from the amazing Heathen Hoof. Aren't you a fan of that band? I thought I remembered you singing their praise once.

Yea - the vocals are what drive it home for me. i love those vocals - that and the guitar tone. his lead tone is awesome. i guess dude is in Morningstar too. Has anyone heard them? i should check it out.

I have never heard Morningstar.

Morningstar RULES!! So much better than Minotauri!! I can't stand these kinda bands-- it's like they string a buncha riffs together with very little cohesion in their vision of what makes a song work; I mean, c'mon guys... Sabbath were about a lot more than riffs, there was a flow to their (finest) work(s). And that's coming from a guy who insisted on having Candlemass' "Solitude" played at his wedding (explains why I'm divorced now, mebbe?).

Not trying to be a prick or nothin', man-- simply certain things happening in metal these daze that piss me the fuck off to the point of obsessiveness. Anyway, here's Morningstar's "Heretic Metal" LP-- kinda like Hellhammer raping Cirith Ungol...

No worries, Jake, to each his own. I definitely take issue with bands that just string riffs together, I just don't see Minotauri as being even that ambitious. I don't think it's Minotauri's intent to be groundbreaking or clever, just doom rock, boneheaded and pure. Thanks for the link, eager to check out Morningstar for sure.

Where does Solitude Aeturnus's " Beyond the Crimson Horizon" rank with you folk?

As much as I wanted to love Solitude Aeturnus I can't get into their stuff, kind of like a poor man's Candlemass to my ears. Maybe now that I'm older I should give them a second shot.

I do love the Heathen Hoof, it's true. So, clearly I *am* able to get past the things that I don't like about his vocals. It's always like this with doom, especially. I start listening and getting into it... then there's this moment of... uh oh... vocals are coming... they should be here soon... uh oh uh oh... and then I fear the CRINGE.

I'm downloading this Morningstar thing now, too. Thanks, Jake.

thanks for making this available. I ve read about them for years but havent heard them yet.

ps - downloading from free internet at a motel while working away from home!

This is amazeing and the cover is the iceing on the doom cake, i only ever heard the split they did with Reverend Bizarre before. Incredible and entertaining blog. Thanks

This is a classic case if I hate something the first time I hear it I end up loving it. Many thanks as always for one of the best blogs out there.

jake thee pope!
cannot stop listening to that morningstar album!
thank you so much

well finish doom is certaintly a quality label in itself , isn´t it ? as for solitude aeturnus i would reommend their latest album "alone" - as always hugest thanks , harry lime

Your blog is very good. I'm looking forward to hear this alot! And, yes, the artwork! Does this exist on vinyl I wonder...

Dag, indeed this is out on vinyl. Thanks for stopping by.

Arghh, just came around to listen to this. Great stuff combined with finnish schnapps Mintu. Cheers!

for some reason the download isn't working now. it keeps redirecting back to itself, if that makes sense.

Thanks for fixing the link to this. That album cover is impossible to resist. Digging the music, too.

Ya' listening to this as I type and diggin' it. I could see how some wouldn't like the vocals...give it a coupla listens. Ha,ha when he says grrrraaaave it cracks me up,in a good way. Was supposed to work Dying Fetus tonight,got cut,feeling under the weather,so now I'm nerding out on Cosmic Hearse. Thanks.

I had my itunes on shuffle and the song "Pain of Life" came on and I was like "Who the hell is this?" I downloaded this from here last year but never got around to listening to it (haha). Thanks Aesop